Kufrinjah in the region of Irbid is a town located in Jordan - some 28 mi or ( 44 km ) North-West of Amman , the country's capital .

Local time in Kufrinjah is now 10:12 AM (Sunday) . The local timezone is named " Asia/Amman " with a UTC offset of 3 hours. Depending on your flexibility, these larger cities might be interesting for you: Nicosia, Aleppo, Damascus, Sakhrah, and Raymun. When in this area, you might want to check out Nicosia . We found some clip posted online . Scroll down to see the most favourite one or select the video collection in the navigation. Are you looking for some initial hints on what might be interesting in Kufrinjah ? We have collected some references on our attractions page.

Walking in Ajloun Nature Reserve, Jordan, my partner and I peered into the "wine press" wells that were carved into stone ~1800 years ago by the Romans. These wells had filled partway with rainwater a ..

A castle in Jordan build first by the nephew of Saladin. Then destroyed by the Mongols. Later rebuild by Mamluks. It has been used until 19 Century but two earthquakes in 1837 and 1924 have severly da ..

this video was shot on a field trip. ..

As-Safena (al-Sāfinah)is a small village of approximately 1,500 people in the western Ajloun region of north Jordan. It is located in a remote, mountainous area about 10 km from the city of Ajloun. Safena comes from the Arabic word for ship, because the mountain the village stands on looks like a ship. The main sources of income are generally from jobs with the military or agriculture. The village consists of the Zreigat and the Ananza families.

Ajloun also written Ajlun is the capital town of the Ajloun Governorate . A hilly town in the north of Jordan, located 76 kilometers (around 47 miles) north west of Amman. It is noted for its impressive ruins the 12th century castle which known nowadays as Ajlun Castle. The Ajlun Governorate has a population of over 142000 widespread in twenty seven villages and towns and area about 420 km.

Ain Janna is a village is located in the Ajloun Governorate in the north-western part of Jordan. The name is Arabic for Spring of Paradise: Ain is a spring (of water), and Janna is Paradise. The name was supposedly given to the village due to the abundance of water springs and apparent availability of water in the village and its surroundings. As a matter of fact, Ain Janna still has some springs, causing its landscape to be green and crystal clear.

Tell Mar Elias is a hill in the Ajlun region of North Jordan. The site, northwest of Ajlun, has long been identified with Tishbe, mentioned in the Bible as the hometown or region of the Prophet Elijah (Elias or Eliya, in Arabic). The remains of one of the largest known Byzantine churches in Jordan can also be found at the site. Artifacts from this site including marble carvings and small metal religious objects are on display at the Ajloun Castle Museum. \t\t \t\t\tMar Elias Lower Chapel. 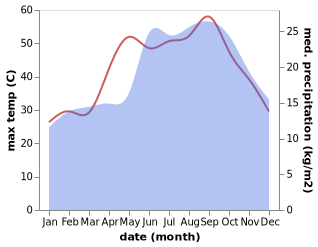