Stauceni in the region of Chişinău with its 5,700 inhabitants is a place in Moldova - some 6 mi or ( 9 km ) North of Chişinău , the country's capital city .

Time in Stauceni is now 08:34 AM (Monday) . The local timezone is named " Europe/Chisinau " with a UTC offset of 2 hours. Depending on your budget, these more prominent locations might be interesting for you: Ungheni, Tiraspol, Stauceni, Goianul Nou, and Cricova. Since you are here already, consider visiting Ungheni . We saw some hobby film on the internet . Scroll down to see the most favourite one or select the video collection in the navigation. Where to go and what to see in Stauceni ? We have collected some references on our attractions page.

Republic of Moldova - A journey through the former soviet republic from the capital Chisinau to Soroca on the Ukraine border. ..

Ciorescu, formerly known as Cricova Nouǎ is a commune in Moldova, located 14 kilometres in the north-east of Chişinău, the capital of Moldova. The commune is part of the Rîşcani sector of the Chişinău municipality. Three villages are administered by the commune: Ciorescu, Făureşti and Goian.

Sectorul Rîşcani is one of the five sectors in Chişinău, the capital of Moldova. The local administration is managed by a pretor appointed by the city administration. It governs over a portion of the city of Chişinău itself (the northeastern part), the town of Cricova, and the communes of Ciorescu, Grătieşti, and Stăuceni. It is largely populated by Russians and Ukrainians. To distinguish it from the village of Riscani elsewhere in Moldova it is often referred to as Riscanovca by locals.

Cricova is a Moldovan town, located 15 kilometres north of Chişinău, the capital of the country. Cricova is famous for its wine cellars, which make it a popular attraction for tourists. The town's population is 9,878 (as of 2004), of which 7,651 are ethnic Moldavians, 788 Ukrainians, 1,123 Russians, 82 Gagauzians, 74 Bulgarians, 6 Jews, 2 Poles, 29 Gypsies, and 123 other/non-declared. Cricova lies near the river Ichel, which goes into the Nistru river, which supplies Chişinău with water.

Cricova' is a Moldovan winery, located in the town with the same name, 15 kilometres north of Chişinău. Famous wine cellars make it a popular attraction for tourists. 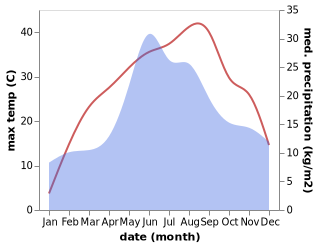