Delve into Tiraspolul Nou in Moldova

Tiraspolul Nou in the region of Raionul Criuleni with its 2,200 residents is located in Moldova - some 36 mi or ( 58 km ) East of Chişinău , the country's capital .

Local time in Tiraspolul Nou is now 04:34 PM (Wednesday) . The local timezone is named " Europe/Chisinau " with a UTC offset of 2 hours. Depending on your mobility, these larger destinations might be interesting for you: Varnita, Sucleia, Straseni, Slobozia, and Orhei. While being here, you might want to check out Varnita . We discovered some clip posted online . Scroll down to see the most favourite one or select the video collection in the navigation. Are you curious about the possible sightsseing spots and facts in Tiraspolul Nou ? We have collected some references on our attractions page.

Tiraspol -The Door In The Wall ..

Trip from Tiraspol to Bender

Tiraspolul Nou is a town in Transnistria, Moldova. It is currently under the administration of the breakaway government of the Transnistrian Moldovan Republic.

Sheriff Stadium is home to Sheriff Tiraspol, a football team based in Tiraspol, capital of Transnistria, and owned by the local Sheriff corporation. It seats 14,300 spectators. It is eligible for international events, that is why Moldova national football team plays some of their international home matches on this stadium.

Tîrnauca is a commune and village in the Slobozia sub-district of Transnistria, Moldova, situated on the east bank of the river Dniester, between Tighina and Tiraspol. It is notable for being home to the largest bottle-shaped building in the world, the Butylka hotel and museum.

Taras Shevchenko Transnistria State University (Russian: Приднестровский государственный университет имени Т. Г. Шевченко) is the main university located in Tiraspol, the capital of Transnistria. It was founded in 1930 as the Institute of public education in the Moldavian Autonomous Soviet Socialist Republic, then being a constituent part of the Ukrainian SSR. Honouring the outstanding Ukrainian poet Taras Shevchenko it was renamed during his 125th anniversary celebration in 1939.

Tiraspol is the second largest city in Moldova and is the capital and administrative centre of the unrecognized Pridnestrovian Moldavian Republic (Transnistria). The city is located on the eastern bank of the Dniester River. Tiraspol is a regional hub of light industry, such as furniture and electrical goods production. 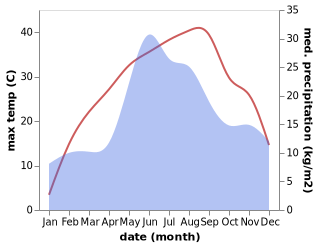