Getafe in the region of Central Visayas with its 4,489 habitants is a place located in Philippines - some 375 mi or ( 603 km ) South-East of Manila , the country's capital .

Local time in Getafe is now 07:10 PM (Friday) . The local timezone is named " Asia/Manila " with a UTC offset of 8 hours. Depending on your mobility, these larger cities might be interesting for you: Vical, Tong-go, Toboso, Talisay City, and Siquijor. When in this area, you might want to check out Vical . We discovered some clip posted online . Scroll down to see the most favourite one or select the video collection in the navigation. Are you looking for some initial hints on what might be interesting in Getafe ? We have collected some references on our attractions page.

This is the View from the tops, a mountain lookout that overlooks all of Cebu City, in the Philippines. I hope you enjoy. Please remember to rate this video. Video By Jason Dragon JasonDragon.com ..

Nalusuan Island is man-made resort island in the Cebu Strait, the Philippines, and one of the islands comprising the Olango Island Group. The island, which measures close to a hectare, is situated in between the Province of Bohol and Mactan Island. Originally a sand bar, it was reclaimed to allow the construction of the Nalusuan Island Resort, which occupies the entire island. The island was originally and locally known as "kalusuan" meaning "a place of penises" in Cebuano.

The Olango Island Group is a group of islands found in the Central Visayas region of the Philippines. It is composed of Olango Island and 6 satellite islets namely: Sulpa, Gilutongan, Nalusuan, Caohagan, Pangan-an, and Camungi. Olango Island and its neighboring islets has a total land area of approximately 10.3 square kilometres . The island group is under the jurisdiction of the City of Lapu-Lapu and the Municipality of Cordova. The island group is a part of Cebu Province.

Bansaan Island is a boomerang-shaped island located at Camotes Sea in the mid-northern coast of Bohol Island, Philippines. It is part of the municipality of Talibon, Bohol Province.

The Battle of Mactan, was fought in the Philippines on 27 April 1521. The warriors of Lapu-Lapu, a native chieftain of Mactan Island, defeated Spanish forces under the command of Ferdinand Magellan, who was killed in the battle. 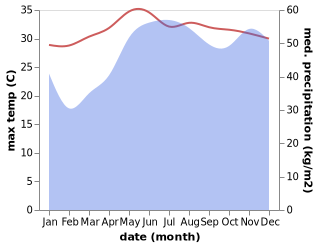