Jiabong in the region of Eastern Visayas with its 4,076 inhabitants is a town in Philippines - some 331 mi or ( 533 km ) South-East of Manila , the country's capital city .

Current time in Jiabong is now 07:28 PM (Saturday) . The local timezone is named " Asia/Manila " with a UTC offset of 8 hours. Depending on the availability of means of transportation, these more prominent locations might be interesting for you: Zumarraga, Tutubigan, Talisay City, Taguig City, and Pambujan. Since you are here already, make sure to check out Zumarraga . We saw some video on the web . Scroll down to see the most favourite one or select the video collection in the navigation. Where to go and what to see in Jiabong ? We have collected some references on our attractions page.

Catbalogan City is the capital of Samar Province, The Philippines with a population of 94,317 (2010 Census). It is Samar's main commercial, trading, educational, political and financial center. It is also an important and major seaport serving inter-island vessels. Catbalogan City's central geographical location in Eastern Visayas makes it ideal as the gateway to the region's three Samar provinces. The city is often referred to as "The Gateway to Samar Region".

Maulong refers to a barangay or village in Catbalogan City, Philippines located between the villages of Payao and Mercedes. It is 518 km southeast of Manila and 2 km from downtown Catbalogan City, the provincial capital of Samar. Camp Vicente Lukban, Philippine Army, 8th Infantry Division covers a large part of Maulong. Most residents are soldiers because of its close proximity to the camp. The camp is named in honor of a Philippine revolutionary officer, Vicente Lukbán.

More reading: Wikipedia Article
Located at 11.79 124.88 (Lat./Long.); Less than 9 km away
Tags: Barangays of the Philippines, Neighborhoods in the Philippines

San Sebastian is a 6th class municipality in the province of Samar, Philippines. According to the 2010 census, it has a population of 7,708 people. San Sebastian was absorbed into the town of Wright during the American occupation. In 1950, the barrios of San Sebastian, Jitaasan, Dolores, Camanjagay, Bontod, Campidasa, Campiyak, Maslog, Balogo, Maropangpang, Binongtoan, and Bolwan was re-created as a town. 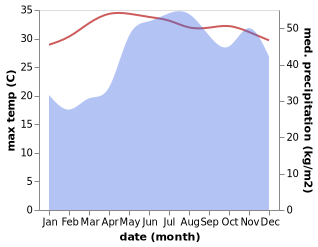