Local time in Yaroslavl' is now 05:48 PM (Tuesday) . The local timezone is named " Europe/Moscow " with a UTC offset of 4 hours. Depending on your mobility, these larger cities might be interesting for you: Zapol'ye, Zagorodnyy, Yaroslavl', Vologda, and Vladimir. When in this area, you might want to check out Zapol'ye . We discovered some clip posted online . Scroll down to see the most favourite one or select the video collection in the navigation. Are you looking for some initial hints on what might be interesting in Yaroslavl' ? We have collected some references on our attractions page.

It is a report about reconstruction of Moskovsky prospekt in Yaroslavl (Yaroslavia TV, yaroslavl.rfn.ru More info about Yaroslavl on www.yarfor.me ..

Shinnik Stadium is a multi-purpose stadium in Yaroslavl, Russia. It is currently used mostly for football matches and is the home ground of FC Shinnik Yaroslavl. The stadium holds 22,990 people. It is planned on being expanded to 45 000 people in capacity, for the FIFA World Cup 2018, which will be hosted in Russia.

The Church of the Ascension of Christ (Вознесенская церковь) is a four-piered penticupolar Orthodox church erected in Kondakovo, a western suburb of Yaroslavl between 1677 and 1682. The first church on the site was commissioned in 1584 by Basil Kondaki, a wealthy Greek merchant, in order to prevent the planned construction of a Lutheran church in Kondakovo. A smaller parish church is dedicated to the Presentation of Jesus at the Temple.

St. John the Baptist Church (Russian: Церковь Иоанна Предтечи) in Yaroslavl is considered to be the acme of the Yaroslavl school of architecture. It was built in 1671-1687 on the bank of Kotorosl river in the Tolchkovo sloboda (district) which at that time was the largest and wealthiest part of the town. Its walls and dome drums are covered with richly glazed tiles; the temple's fifteen onion domes are assembled in three groups. 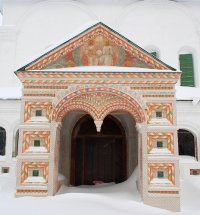 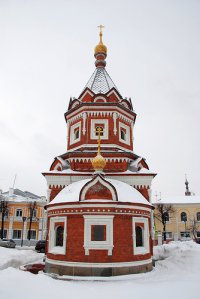 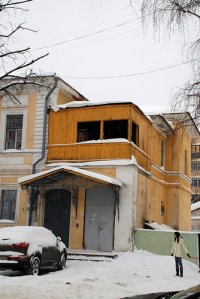 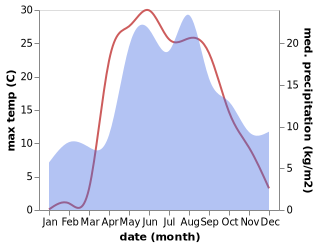