Time in Kostroma is now 11:29 PM (Saturday) . The local timezone is named " Europe/Moscow " with a UTC offset of 4 hours. Depending on your budget, these more prominent places might be interesting for you: Yur'yevka, Yaroslavl', Vologda, Vladimir, and Tula. Being here already, consider visiting Yur'yevka . We collected some hobby film on the internet . Scroll down to see the most favourite one or select the video collection in the navigation. Check out our recomendations for Kostroma ? We have collected some references on our attractions page.

The Upper Volga: A photograhic Journey by Sergei Mikhailovich Prokudin-Gorski in 1910

Here I present a journey down the Upper Volga in 1910 with photographs taken by the great Russian photographer Sergei Mikhailovich Prokudin-Gorski. Accompaning music by the Russian composer Anton Aren ..

The Gostiny Dvor in Kostroma is the best preserved complex of provincial Neoclassical trading arcades in Russia. It was built on the site of the ancient Kostroma kremlin after the great fire of 1773. The complex comprises more than ten buildings constructed over a period of almost five decades. The merchant court was designed by Charles Claire, although many other architects modified the original design. The construction was supervised by the local Vorotilov family.

Bogoyavlensky Convent is one of the most populous Russian Orthodox convents. It is situated in Kostroma and is known as the location of the ancient Feodorovskaya Icon of God's Mother. It was founded as Bogoyavlensky Monastery in the 15th century by Nikita, a disciple and a relative of St Sergius of Radonezh. The five-domed katholikon of traditional Byzantine design was constructed under Ivan the Terrible, starting in 1559.

The Kostroma is a river in the European part of Russia. It flows through the Kostroma and Yaroslavl Oblasts, and is a left tributary of the Volga, which it enters at the Gorky Reservoir, at the city of Kostroma, at {{#invoke:Coordinates|coord}}{{#coordinates:57|46|44|N|40|53|55|E| | |name= }}. Prior to the creation of the Gorky Reservoir it flowed into the Volga within the city limits of Kostroma. The Ipatiev Monastery is located at the old confluence of the Kostroma and the Volga.

The Ipatiev Monastery (Ипатьевский монастырь in Russian)—sometimes translated into English as Hypatian Monastery—is a male monastery, situated on the bank of the Kostroma River just opposite the city of Kostroma. It was founded around 1330 by a Tatar convert, Prince Chet, whose male-line descendants include Solomonia Saburova and Boris Godunov.

Kostroma Airport is an airport in Russia located 6 km northeast of Kostroma. It services propeller-driven transports. 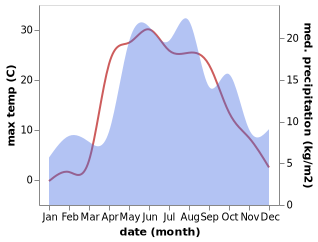