Current time in Tall Rif'at is now 02:37 AM (Friday) . The local timezone is named " Asia/Damascus " with a UTC offset of 3 hours. Depending on the availability of means of transportation, these more prominent locations might be interesting for you: Manq, Tall Jibbin, Nicosia, Tall al Hisn, and Tall Qarah. Since you are here already, make sure to check out Manq . We saw some video on the web . Scroll down to see the most favourite one or select the video collection in the navigation. Where to go and what to see in Tall Rif'at ? We have collected some references on our attractions page.

Pictures of Aleppo and St-Simeon ..

Arpad was an ancient Aramaean city located in north-western Syria, north of Aleppo. It became the capital of Aramaean state of Bet-Gus established by Gus of Yahan in the 9th century BC. Bet-Gus stretched from the A'zaz area in the north to Hamath in the south. Arpad later became a major vassal city of the Kingdom of Urartu. In 743 BC, during the Urartu-Assyria War, the Neo-Assyrian king Tiglath-Pileser III laid siege to Arpad following the defeat of the Urartuan army of Sarduri II at Samsat.

Menagh Air Base (or Minnigh airport, Minakh Air Base) is a Syrian Air Force installation located 6 kilometres south of Azaz, Aleppo Governorate, Syria. Menagh Air Base is home to the 4th Flying Training Squadron, equipped with MBB 223 Flamingo trainer aircraft and Mil Mi-8 helicopters. The air base is currently a major target of the Syrian opposition in the ongoing Syrian civil war, who as of January 2013 have surrounded the facility.

Azaz is a small town in Syria, roughly 20 miles (30 kilometres) north-northwest of Aleppo. It is notable for its proximity to a Syrian–Turkish border post and is historically significant as the site of the Battle of Azaz between the Crusader States and the Seljuk Turks on June 11, 1125.

A'zaz is a Syrian district administratively belonging to Aleppo Governorate. At the 2004 Census it had a population of 251,769. Its administrative centre is the city of A'zaz.

The battle of Marj Dābiq was a decisive military clash in Middle Eastern history, fought on 24 August 1516, near the town of Dabiq, 44 km north of Halab (Aleppo), Syria. 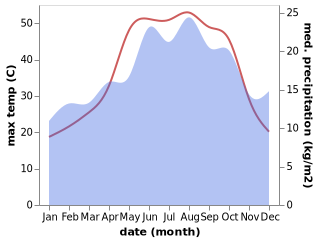