Current time in Ar Raqqah is now 12:37 AM (Thursday) . The local timezone is named " Asia/Damascus " with a UTC offset of 3 hours. Depending on the availability of means of transportation, these more prominent locations might be interesting for you: Raqqat Samrah Wustaniyah, Jisr Hajjiyat, Sahl, Ukayrishah, and Manbij. Since you are here already, make sure to check out Raqqat Samrah Wustaniyah . We encountered some video on the web . Scroll down to see the most favourite one or select the video collection in the navigation. Where to go and what to see in Ar Raqqah ? We have collected some references on our attractions page.

Some of my vacation - Syria

Ar-Raqqah, also spelled Rakka, is a city in north central Syria located on the north bank of the Euphrates, about 160 km east of Aleppo. It is the capital of the Al-Raqqah Governorate and one of the main cities of the historical Diyār Muḍar, the western part of the Jazīra. According to the 2004 official census, the population of the city is 220,488 people.

The Great Mosque of Raqqah is the oldest mosque in ar-Raqqah, Syria, located at the northern section of the city's heart. It has a rectangular plan (108 meters x 92 meters) with 1.7 meters thick mud brick walls fortified with semi-circular towers at the corners. The outer walls of the mosque are constructed of mud bricks supported by solid semi-circular buttress towers.

More reading: Wikipedia Article
Located at 35.95 39.02 (Lat./Long.); Less than 0 km away
Tags: Art museums and galleries in Syria, Buildings and structures in Ar-Raqqah, Museums in Syria

The Bronze Age town of Tuttul is identified with the archaeological site of Tell Bi'a in Ar-Raqqah Governorate, northern Syria. Tell Bi'a is located near the modern city of Ar-Raqqah and the confluence of the rivers Balikh and Euphrates. During the Middle Bronze Age (c. 2000-1600 BCE), Tuttul was city sacred to the god Dagan, worshipped across the Ancient Near East. However, the settlement at Tell Bi'a had been occupied since the mid-3rd millennium BCE.

Tell Zeidan is an archaeological site of the Ubaid culture in northern Syria, from about 5500 to 4000 BC. The dig consists of three large mounds on the east bank of the Balikh River, slightly north of its confluence with the Euphrates River, and is located about 5 km east of the modern Syrian city of ar-Raqqah (or Raqqa). This site is included within the historical region known as Mesopotamia and the Tigris-Euphrates river system, often called the Cradle of Civilization. 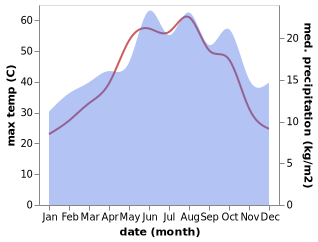