Local time in Edirne is now 11:56 AM (Sunday) . The local timezone is named " Europe/Istanbul " with a UTC offset of 2 hours. Depending on your mobility, these larger cities might be interesting for you: İzmir, Bucharest, Yambol, Stara Zagora, and Sofia. When in this area, you might want to check out İzmir . We discovered some clip posted online . Scroll down to see the most favourite one or select the video collection in the navigation. Are you looking for some initial hints on what might be interesting in Edirne ? We have collected some references on our attractions page.

A brief visit to the Greek side of the Greek Turkish border in Kastanies during my tour of the south east region of Europe. See also my blog at borderhunting.blogspot.com ..

© zoqy.net While visiting Turkey we visited the town of Edirne ..

The Old Mosque is an early 15th century Ottoman mosque in Edirne, Turkey.

The Selimiye Mosque is an Ottoman mosque in the city of Edirne, Turkey. The mosque was commissioned by Sultan Selim II and was built by architect Mimar Sinan between 1569 and 1575. It was considered by Sinan to be his masterpiece and is one of the highest achievements of Islamic architecture.

Edirne Synagogue, is an abandoned synagogue located in Maarif Cd, 10 in Edirne, Turkey. The synagogue was built in 1907 by the architectural model of Leopoldstädter Tempel in Vienna. The synagogue was in use until 1983 and could accommodate 1,200 worshipers, 900 men and 300 women.

More reading: Wikipedia Article
Located at 41.67 26.55 (Lat./Long.); Less than 1 km away
Tags: Buildings and structures in Edirne, Synagogues in Turkey

The Saraçhane Bridge (Saraçhane Köprüsü), also known as the Sultan's Bridge, Şahabettin Paşa–Sultan Mustafa Bridge or Horozlu Köprüsü (Rooster Bridge) is an Ottoman bridge across the Tunca river in Edirne, Turkey. The bridge was built in 1451 (H. 855) on the direction of Şahabettin Paşa, the Beylerbey of Rumelia in the court of Sultan Murad II. It is 120 meters long and 5 meters wide, with 11 piers and 12 arches. The bridge was repaired during the reign of Sultan Mustafa II in 1706 (H. 1113). 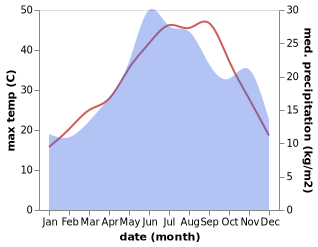