Simferopol in the region of Avtonomna Respublika Krym with its 358,108 inhabitants is a town in Ukraine - some 415 mi or ( 667 km ) South-East of Kiev , the country's capital city .

Current time in Simferopol is now 11:11 PM (Sunday) . The local timezone is named " Europe/Simferopol " with a UTC offset of 4 hours. Depending on the availability of means of transportation, these more prominent locations might be interesting for you: Zhigulina Roshcha, Zamost'ye, Vera-Abdal, Ukromne, and Strohonivka. Since you are here already, make sure to check out Zhigulina Roshcha . We encountered some video on the web . Scroll down to see the most favourite one or select the video collection in the navigation. Where to go and what to see in Simferopol ? We have collected some references on our attractions page.

The Crimea State Medical University is located in the South of Ukraine on the Crimean peninsula. With its mild and sunny climate, varied and picturesque landscape, and ancient history the Crimea is a ..

This video is dedicated to Michael T Weiss trip to Thailand. Music, of course not Thai, but I liked it. It performs Yuki Kajiura. I hope that you will be not indifferent. ..

Fiolent, was the home ground of the now defunct Ukrainian football club of FC Ihroservice Simferopol. The ground opened for use on April 1st, 1935. The former names it carried were Synie pole (Blue field), Kharchovyk (Food dealer), Avant-garde, Meteor. It can hold 5,000 spectators. Size of the field is 105m x 68m. Ukrainian Second League club Zhemchuzhyna Yalta moved their home games in the 2012–13 season from Round 16 onwards while their home ground was under pitch reconstruction.

The 1st Gymnasium (Simferopol) or officially Konstantin Ushinsky Gymnasium No.1 of Simferopol municipality Autonomous Republic of Crimea (Ukrainian: Гімназія №1 ім. Ушинського Сімферопольської міської ради Автономної Республіки Крим) located in Simferopol, Crimea, was founded in 1812 and is one of the oldest public schools in Ukraine. 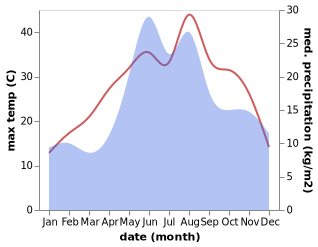