Local time in Sun City is now 06:37 AM (Thursday) . The local timezone is named " America/Phoenix " with a UTC offset of -7 hours. Depending on your flexibility, these larger cities might be interesting for you: Mexicali, Bumstead, El San Juan Trailer Park, Flagstaff, and Florence. When in this area, you might want to check out Mexicali . We found some clip posted online . Scroll down to see the most favourite one or select the video collection in the navigation. Are you looking for some initial hints on what might be interesting in Sun City ? We have collected some references on our attractions page.

Sun City is a census-designated place and unincorporated town in Maricopa County, Arizona, United States, that is within the Phoenix metropolitan area. The population was 38,309 according to the 2000 census. Its adjoining sister city is Sun City West. Both cities are retirement communities popular with snowbirds.

Youngtown is a town in Maricopa County, Arizona, United States. According to 2008 Census Bureau and Arizona Department of Commerce estimates, the population of the town is 6,522. Youngtown is the oldest retirement community in the US. In 1954, two developers bought 320 acres of farmland & built is notable as the first master-planned, adult community in the United States, dedicated exclusively to retirees, designed by Ben Schleifer.

Peoria is a city in Maricopa and Yavapai counties in the U.S. state of Arizona. Most of the city is located in Maricopa County, while a tiny portion in the north is in Yavapai County. It is a major suburb of Phoenix. According to 2010 Census Bureau releases, the population of the city is 154,065. Peoria is currently the sixth largest city in Arizona for land area, and the ninth largest for population. It was named after Peoria, Illinois.

El Mirage is a city in Maricopa County, Arizona, United States. According to Census 2010, the population of the city is 31,767.

The Peoria Sports Complex is a baseball complex located in Peoria, Arizona, near Peoria's main shopping district on Bell Road. It consists of the main baseball stadium (Peoria Stadium) and twelve practice fields. It is one of five facilities to host Arizona Fall League games. During Spring training, it is the home stadium of both the San Diego Padres and the Seattle Mariners, who play in the spring training Cactus League. 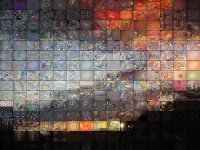 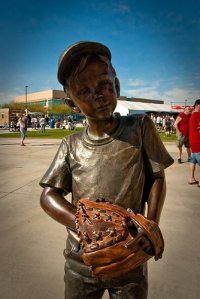