Current time in Captain Cook is now 03:15 AM (Tuesday) . The local timezone is named " Pacific/Honolulu " with a UTC offset of -10 hours. Depending on your travel modalities, these larger destinations might be interesting for you: Kailua Kona, Keanapa'akai, Keokea, Lihue, and Monohaa. While being here, make sure to check out Kailua Kona . We encountered some video on the web . Scroll down to see the most favourite one or select the video collection in the navigation. Are you curious about the possible sightsseing spots and facts in Captain Cook ? We have collected some references on our attractions page.

Exploring the History and Waters of Kealakekua Bay

A place of both dramatic historic events and unparalleled scenery, beautiful and now peaceful Kealakekua Bay (Pathway of the Gods) opens beneath steep, beetling cliffs on the ancient surfing beach alo ..

Ideally situated in the famous Kona coffee-growing region on the Big Island of Hawaii, this magnificent property is the home of Aloha Island Coffee Company, (www.alohaislandcoffee.com) supplier of Kon ..

Kona Coffee Living History Farm is located on the Daisaku Uchida Coffee Farm, in the Kona District, on the Big Island of Hawaiʻi. The 5.5-acre historic Kona coffee farm first established in 1900. The open air agriculture museum depicts the daily lives of early Japanese immigrants to Hawaii during the period of 1920-1945.

The Amy B. H. Greenwell Ethnobotanical Garden is a botanical garden near Captain Cook, Hawaii in the Kona District on the Big Island of Hawaii.

Konawaena High School is a public school located in the community of Kealakekua, Kona District, Hawaii County, Hawaii, United States. Konawaena means "the center of the leeward side" in the Hawaiian Language.

Captain Cook is a census-designated place (CDP) in Hawaiʻi County, Hawaiʻi, in the United States located in the District of South Kona. The community, which is actually located in the land division of Kealakekua, is so named because the post office for the area was located in the Captain Cook Coffee Co. during the early 1900s. As of the 2000 census, the CDP population was 3,206. The population increased by 7.0% to 3,429 at the 2010 census.

Kealakekua Bay is located on the Kona coast of the island of Hawaiʻi about 12 miles south of Kailua-Kona. Settled over a thousand years ago, the surrounding area contains many archeological and historical sites such as religious temples, and was listed in the National Register of Historic Places listings on the island of Hawaii in 1973 as the Kealakekua Bay Historical District. The bay is a marine life conservation district, a popular destination for kayaking, Scuba diving and snorkeling. 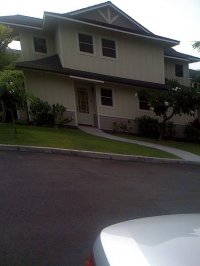 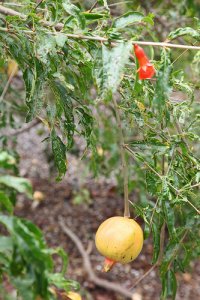 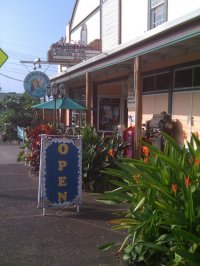 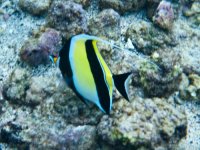