Current time in Kealakekua is now 02:09 AM (Tuesday) . The local timezone is named " Pacific/Honolulu " with a UTC offset of -10 hours. Depending on the availability of means of transportation, these more prominent locations might be interesting for you: Kahaluu, Kailua Kona, Kaukahoku, Keanapa'akai, and Lihue. Since you are here already, make sure to check out Kahaluu . We saw some video on the web . Scroll down to see the most favourite one or select the video collection in the navigation. Where to go and what to see in Kealakekua ? We have collected some references on our attractions page.

Exploring the History and Waters of Kealakekua Bay

A place of both dramatic historic events and unparalleled scenery, beautiful and now peaceful Kealakekua Bay (Pathway of the Gods) opens beneath steep, beetling cliffs on the ancient surfing beach alo ..

Ideally situated in the famous Kona coffee-growing region on the Big Island of Hawaii, this magnificent property is the home of Aloha Island Coffee Company, (www.alohaislandcoffee.com) supplier of Kon ..

KKON is a radio station licensed to serve Kealakekua, Hawaii. The station is owned by Pacific Radio Group, Inc. It airs a Sports radio format featuring programming from ESPN Radio. The station was assigned the KKON call letters by the Federal Communications Commission.

Kealakekua is a census-designated place (CDP) in Hawaiʻi County, Hawaiʻi, United States. The population was 1,645 at the 2000 census. It was the subject of the 1933 popular song, "My Little Grass Shack in Kealakekua, Hawaii" by Bill Cogswell, Tommy Harrison and Johnny Noble which became a Hawaiian Music standard. See also: Kealakekua Bay, where the British explorer Capt. James Cook was killed.

Konawaena High School is a public school located in the community of Kealakekua, Kona District, Hawaii County, Hawaii, United States. Konawaena means "the center of the leeward side" in the Hawaiian Language.

Captain Cook is a census-designated place (CDP) in Hawaiʻi County, Hawaiʻi, in the United States located in the District of South Kona. The community, which is actually located in the land division of Kealakekua, is so named because the post office for the area was located in the Captain Cook Coffee Co. during the early 1900s. As of the 2000 census, the CDP population was 3,206. The population increased by 7.0% to 3,429 at the 2010 census.

The Amy B. H. Greenwell Ethnobotanical Garden is a botanical garden near Captain Cook, Hawaii in the Kona District on the Big Island of Hawaii. 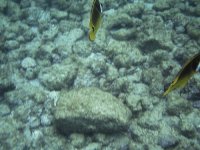 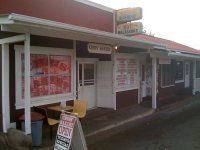