You are here: » » » Uchqurghon Shahri

Uchqurghon Shahri in the region of Namangan Province with its 33,323 habitants is a town located in Uzbekistan - some 149 mi or ( 240 km ) East of Tashkent , the country's capital .

Local time in Uchqurghon Shahri is now 04:03 PM (Sunday) . The local timezone is named " Asia/Tashkent " with a UTC offset of 5 hours. Depending on your flexibility, these larger cities might be interesting for you: Dushanbe, Uychi, Tashkent, Nooshkent, and Namangan. When in this area, you might want to check out Dushanbe . Are you looking for some initial hints on what might be interesting in Uchqurghon Shahri ? We have collected some references on our attractions page. 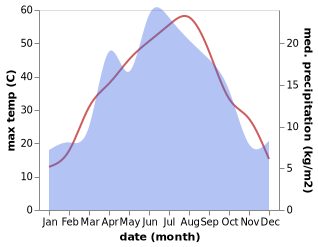