Alaqahdari Gelan in the region of Ghaznī is a city located in Afghanistan - some 153 mi or ( 246 km ) South-West of Kabul , the country's capital city .

Time in Alaqahdari Gelan is now 11:10 AM (Monday) . The local timezone is named " Asia/Kabul " with a UTC offset of 4.5 hours. Depending on your travel resources, these more prominent places might be interesting for you: Miray, Yahya Khel, Wechah Kala, Tormay, and Shargi Mul Khel. Being here already, consider visiting Miray . Check out our recomendations for Alaqahdari Gelan ? We have collected some references on our attractions page.

Jadna (Gilan, Gelan) is a village and the district center of Gelan District, Ghazni Province, Afghanistan. It is situated in the central part of the district at {{#invoke:Coordinates|coord}}{{#coordinates:32.7261|N|67.6347|E||||| | |name= }} at 1,983 m altitude. The houses are made of mud bricks and the streets are unpaved.

Gelan is a district in the south of Ghazni Province, Afghanistan. Its population, which is 100% Pashtun, was estimated at 78,408 in 2002. The district capital is Janda. 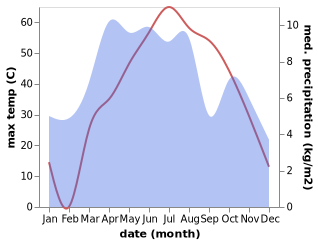