Delve into Navapolatsk in Belarus

Current time in Navapolatsk is now 01:54 AM (Saturday) . The local timezone is named " Europe/Minsk " with a UTC offset of 3 hours. Depending on your travel modalities, these larger destinations might be interesting for you: Ludza, Pskov, Veliky Novgorod, Tallinn, and Vilnius. While being here, make sure to check out Ludza . We encountered some video on the web . Scroll down to see the most favourite one or select the video collection in the navigation. Are you curious about the possible sightsseing spots and facts in Navapolatsk ? We have collected some references on our attractions page.

sorry for my shit camera, it records sound bad, so i had to replace the audio track + watch on 480p **Notice: I do not in any way, shape or form own the song "Day Old Hate". This was originally writte ..

Atlant Stadium is a multi-purpose stadium in Novopolotsk, Belarus. It is currently used mostly for football matches and is the home ground of Naftan Novopolotsk. The stadium was built in 1970 and is currently holds 4,520 people.

Navapolatsk (Belarusian: Наваполацк; Russian: Новополоцк, Novopolotsk, lit. New Polatsk) is a city in Vitsebsk Province, Belarus, with a population (2008 estimate) of 107,458. Founded in 1958, it is located close to the city of Polatsk and the name literally means "New Polatsk".

Borovitsy (also Borovitsi, Polotsk Northwest, and Borovtsy) is an air base in Belarus, located 16 km northwest of Polatsk. It is a Cold War air base with sprawling taxiway area and pads for about 40 aircraft. During the 1960s it was probably home to attack aircraft regiments, but by the 1980s it was served only by the 276 BVP (276th Combat Helicopter Regiment) flying Mi-8 and Mi-24 helicopters.

Boris Stones, also called Dvina Stones, are seven medieval artifacts erected along the bank of the Western Dvina between Polotsk and Drissa, Belarus. They probably predate Christianity in the area, but were inscribed in the 12th century with text and an image of Christ. The largest of the stones is 17 metres in circumference.

The Cathedral of Holy Wisdom in Polotsk (Belarusian: Полацкі Сафійскі сабор; Russian: Собор Святой Софии в Полоцке) was built by Prince Vseslav Briacheslavich (rr.1044–1101) between 1044 (it is first mentioned in the Voskresenskaia Chronicle under the year 1056) and 1066. It stands at the confluence of the Polota and Western Dvina Rivers on the eastern side of the city and is probably the oldest church in Belarus. 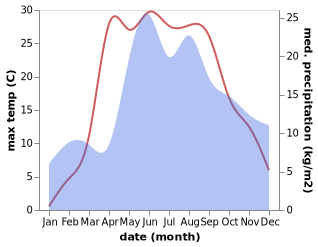