Delve into Zivinice in Bosnia and Herzegovina

Local time in Zivinice is now 08:34 PM (Monday) . The local timezone is named " Europe/Sarajevo " with a UTC offset of 1 hours. Depending on your mobility, these larger destinations might be interesting for you: Oradea, Pristina, Belgrade, Budapest, and Bratislava. While being here, you might want to check out Oradea . We discovered some clip posted online . Scroll down to see the most favourite one or select the video collection in the navigation. Are you curious about the possible sightsseing spots and facts in Zivinice ? We have collected some references on our attractions page.

Phototropic Records and Imba bring to you a compilation of pure Goa trance. Featuring some of the best new artists to arrive onto the Goa scene, the listener is treated to shades of light and dark, me ..

This drunken flow (full of mistakes and missed keys ) we dub to all the people that thought of the song The Knights of the Jaguar as their anthem especially to the generation of people who lived clubs ..

...original version taken down by YouTube due to copyright issues with the music... In 1998, Fort Hood's 1st Calvary Division deployed to Bosnia. My unit, Delta 2/8, lived in Camp Bedrock, which was n ..

Bašigovačko Lake (Bašigovačko jezero) is a lake in the municipality of Živinice, eastern Bosnia and Herzegovina.

Tuzla Air Base is a former SFR Yugoslav Air Force and later, NATO Air Force base, located 6.4 miles south-southeast of Tuzla, Bosnia and Herzegovina. It also shares the runway with the Tuzla International Airport. It was used by the United States, Russian, and allied NATO forces, beginning in 1995 as part of the NATO Stabilization Forces (SFOR), which brought peace to Bosnia and Herzegovina.

Tuzla International Airport (Bosnian: Međunarodni aerodrom Tuzla/Међународни аеродром Тузла; Croatian: Međunarodna zračna luka Tuzla) is an airport near Tuzla, Bosnia and Herzegovina. The airport is a civilian airport and a military airbase. Its operating hours are from 06:00 to 20:00 LT for commercial air carriers and 06:00 to 17:00 LT for general/corporate aviation with a possible extension.

Vršani is a village in the municipality of Bijeljina, Republika Srpska, Bosnia and Herzegovina. 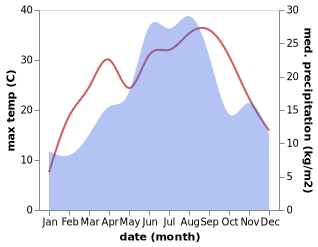