Time in Požega is now 05:43 AM (Sunday) . The local timezone is named " Europe/Zagreb " with a UTC offset of 1 hours. Depending on your travel resources, these more prominent places might be interesting for you: Pristina, Belgrade, Pécs, Budapest, and Bratislava. Being here already, consider visiting Pristina . We collected some hobby film on the internet . Scroll down to see the most favourite one or select the video collection in the navigation. Check out our recomendations for Požega ? We have collected some references on our attractions page.

Surviving the harsh land of Minecraft-part 1

I'm back! Playing some Minecraft. ..

Saint Teresa of Ávila Cathedral is a cathedral in Požega, Croatia, and the seat of the Požega diocese. Located near Požega city center and at the foot of the hill where a medieval fortress once stood, this cathedral is a beautiful example of Baroque architecture.

The Požega Valley is a geographic microregion of Croatia, located in central Slavonia, encompassing the eastern part of the Požega-Slavonia County. It is located in the Pannonian Basin, bounded by Psunj, Papuk and Krndija mountains from west and north, and Požeška Gora and Dilj from south and east, as the Pannonian plain is interspersed by horst and graben structures. The largest settlement in the region is the city of Požega, followed by Pleternica and Kutjevo.

Požega-Slavonia county is a Croatian county in western Slavonia. Its capital is Požega. Population: 85,831 (2001 census).

Jakšić is a village in Slavonia, Croatia. The population of the village was 4.437 in 2001, 93% were Croats. It is located in the middle of a valley called Vallis aurea known for its natural wealth.

Pleternica is a town in the region of Slavonia, Croatia, 12 km southeast of Požega, in the Požega Valley (Požeška kotlina). The population of the municipality is 11,286, with 3,443 in Pleternica itself (2011). Pleternica is located at the confluence of the river Londža into the Orljava river, at the foot of the mountain Požeška Gora; elevation 153 m . The place was first mentioned in 1270 under the name Sveti Nikola (St. Nicholas); the first mention under the present name was in 1427. 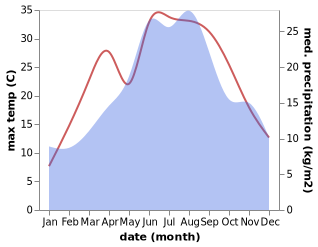