Current time in Al 'Ayyat is now 01:58 PM (Sunday) . The local timezone is named " Africa/Cairo " with a UTC offset of 2 hours. Depending on the availability of means of transportation, these more prominent locations might be interesting for you: Tyre, Gaza, Tel Aviv, Haifa, and Zawiyat Umm Husayn. Since you are here already, make sure to check out Tyre . We encountered some video on the web . Scroll down to see the most favourite one or select the video collection in the navigation. Where to go and what to see in Al 'Ayyat ? We have collected some references on our attractions page.

The 50 most Populated cities in Africa This numbers include the Metropolitan Area (The City + The Surrounding Towns) ..

One of the last services in the Ben Ezra Synagogue. Maariv followed by lighting of the nerot. ..

The Red (North) Pyramid and Bent Pyramid at Dahshur Egypt. You may get the feeling of being on the Sahara Desert. The building I called the temple is probably the Black Pyramid. This area is 10 km sou ..

The Al Ayyat train disaster happened at 02:00 on the morning of 20 February 2002 in a passenger train of eleven carriages, travelling from Cairo to Luxor. In its fifth carriage a cooking gas cylinder exploded and created a fire which spread as the train ran. Seven of its carriages, all third class, were burnt almost to cinders. The number of dead given by officials at the time was 383, all Egyptians.

The Al Ayyat train collision killed at least 50 people and injured 30 others on 24 October 2009. The incident occurred in Al Ayyat , 6th of October governorate, located 50 km south of Cairo. The official death toll has increased and might increase further. One of the trains was going southward to visit the Asyut and Aswan, popular tourist destinations.

Lisht or el-Lisht is an Egyptian village located south of Cairo. It is the site of Middle Kingdom royal and elite burials, including two pyramids built by Amenemhat I and Senusret I. The two main pyramids were surrounded by smaller pyramids of members of the royal family, and many mastaba tombs of high officials and their family members. They were constructed throughout the Twelfth and Thirteenth Dynasties.

Pyramid of Senusret I

The Pyramid of Senusret I is an Egyptian Pyramid built to be the burial place of the Pharaoh Senusret I. The pyramid was built during the twelfth dynasty of Egypt at el-Lisht, near the pyramid of his father, Amenemhat I. Its ancient name was Senusret Petei Tawi (Senusret beholds the two lands). The pyramid was 105 meters on each side with a height of 61.25 meters; the slope of the four faces was 49° 24' degrees.

The Pyramid of Raneferef, also known as the Pyramid of Neferefre, is an unfinished Egyptian pyramid from the 5th Dynasty, located in the necropolis of Abusir, Egypt. After the early death of Pharaoh Raneferef, the unfinished building was reconstructed into a geometric mastaba, becoming the burial place of the deceased king. Despite the demolition of the actual pyramid, the complex was augmented through extensive construction of temples by Raneferef's successors. 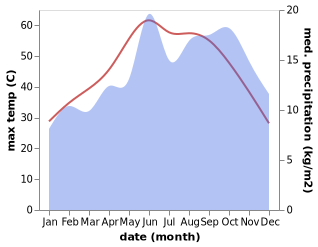