Delve into Asyut in Egypt

Local time in Asyut is now 03:15 PM (Monday) . The local timezone is named " Africa/Cairo " with a UTC offset of 2 hours. Depending on your mobility, these larger destinations might be interesting for you: Sukkarah, Suhaj, Rifah, Qirqaris, and Qina. While being here, you might want to check out Sukkarah . We discovered some clip posted online . Scroll down to see the most favourite one or select the video collection in the navigation. Are you curious about the possible sightseeing spots and facts in Asyut ? We have collected some references on our attractions page.

Every year during the month of August, believers in the virgin mary coming from everywhere. Christian (+ moslem) reside for sometimes 40 days in the mountain dronka where things seem to have happened. ..

DVD Available and Download to Own at: www.longtailnet.com Every day, somewhere in the world, an archeological site is looted, often with an eye to find antiquities to sell in the big money market for ..

A cruise on the river Nile, this is how I will begin my film.

By end of March 2009 we are going to do a cruise on the river Nile. I always make the beginning of the film before I'm leaving. This is how I will start the film. Like I said before and now, I like or ..

Asiut University Stadium is a football stadium in Asyut, Egypt. It is the home stadium of Asyut Petroleum of the Egyptian Premier League. The stadium holds 25,000 spectators.

The Assiut Barrage is a dam on the Nile in the city of Assiut in Upper Egypt (250 miles to the south of Cairo). It was designed by the famous British engineer Sir William Willcocks who also designed and built the Aswan Dam. The Assiut dam was constructed between 1898 and 1903 across the Nile, about 350 miles down-stream from the Aswan Dam in order to divert the water of the river at low water into Egypt's largest irrigation canal, the Ibrahimiya Canal.

Durunka or Deir Durunka is an Upper Egyptian village, located on the west bank of the Nile, in the Asyut Governorate.

Beni Mur is an Egyptian town in Upper Egypt located 8 kilometers north of the city of Asyut. A prominent figure from Beni Mur is the former President of Egypt, Gamal Abdel Nasser. According to Robert Stephens, the town as named after the tribe of "Beni Mur" who hailed from the Hejaz in the western Arabian Peninsula. Beni Mur is also the site of the Church of Saint George which is visited annually on 1 May by local Coptic pilgrims. 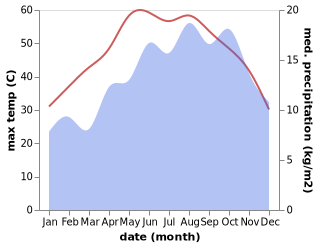