Current time in Minya is now 10:12 PM (Tuesday) . The local timezone is named " Africa/Cairo " with a UTC offset of 2 hours. Depending on the availability of means of transportation, these more prominent locations might be interesting for you: Gaza, Zawiyat Hatim, Zawiyat al Amwat, Tukh al Khayl, and Suhaj. Since you are here already, make sure to check out Gaza . We saw some video on the web . Scroll down to see the most favourite one or select the video collection in the navigation. Where to go and what to see in Minya ? We have collected some references on our attractions page.

Sunset over the the river Nile in Egypt. This video from www.clipcanvas.com showcases one of tens-of-thousands of cheap and high quality HD stock footage clips that are offered on Clipcanvas. These fo ..

Minya is the capital of Minya Governorate in Upper Egypt. It is located approximately 245 km south of Cairo on the western bank of the Nile River, which flows north through the city. The name of the city is derived from its Ancient Egyptian name Men'at Khufu, meaning the nursing city of Khufu, linking it to the Pharaoh Khufu or Cheops, founder of the Great Pyramid at Giza.

Minia University was established in Minya, Egypt in 1976 by virtue of Republican Decree No. (93), separating from Assiut University. The campus is north of Minya. Its emblem is Nefertiti's head.

The necropolis known as the Fraser Tombs is located about 10 km northeast of Al Minya, and about 2 km south of Tihna el-Gebel, in Middle Egypt. The rock-cut tombs date back to the fourth and fifth dynasties of the Old Kingdom. These tombs were first discovered in fall of 1853 by the German Egyptologist Heinrich Brugsch and first described by the British civil engineer George Willoughby Fraser, whose name was given to these tombs.

Akoris (Egyptian: Mer-nefer, Per-Imen-m3t-khent, or Dehenet is the Greek name for the modern Egyptian village of Ṭihnā al-Ǧabal, located about 12 km north of Al Minya. The ancient site is situated in the southeast of the modern village.

Zawyet el-Maiyitin or Zawyet Sultan or Zawyet el-Amwat is a small village in Egypt, located in the Minya Governorate. The site has a small step-pyramid of the late 3rd Dynasty, remarkable for being the only pyramid built on the east bank of the Nile. It also comprises rock-cut tombs of the late Old Kingdom. 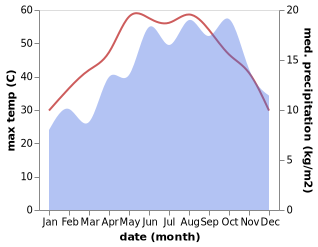