Local time in Kavala is now 02:28 AM (Thursday) . The local timezone is named " Europe/Athens " with a UTC offset of 2 hours. Depending on your flexibility, these larger cities might be interesting for you: İzmir, Bucharest, Sofia, Smolyan, and Plovdiv. When in this area, you might want to check out İzmir . We found some clip posted online . Scroll down to see the most favourite one or select the video collection in the navigation. Are you looking for some initial hints on what might be interesting in Kavala ? We have collected some references on our attractions page.

The Archaeological Museum of Kavala (Greek: Αρχαιολογικό Μουσείο Καβάλας) is a museum in Kavala, West Macedonia, Greece, located towards the western end of the Ethnikis Antistasis road in Kavala. The museum was established in 1934, and reopened in 1964 in its current premises. Τhe museum as it stands today was built by the architects D. Fatouros and G. Triantaphyllides, professors of the Polytechnic School and the Aristotle University of Thessaloniki between 1963 and 1964.

The Kavala Municipal Museum opened in 1986 in a two-story neoclassical building in Kavala city centre, very close to the Town Hall. Early in 2001, the museum moved to a tobacco warehouse, in Kapnergati Square, a much larger space. The museum includes a gallery of modern art, a gallery of local painters and the archive and sculpture gallery of Greek-born US sculptor Polygnotos Vagis. Vagis was born in 1894 on Thasos, but emigrated to America, where he became a sculptor.

The Kavala aqueduct, popularly known as the Kamares, is a well-preserved aqueduct in the city of Kavala, Greece, and is one of the city's landmarks. While the aqueduct is "probably of Roman origin", the present structure dates to the 16th century. A Byzantine barrier wall of the early 14th century, built as part of the fortifications on the Kavala acropolis, probably also functioned as an aqueduct.

The Kavala Institute of Technology is a public institute providing university-level education in Eastern Macedonia and Thrace. The institute has three campuses; the main campus in St. Lukas, Kavala, and additional campuses in Drama and Didymoteicho, Evros regional unit. The TEI of Kavala has 13,500 registered students, ranking seventh among the 16 technological educational institutes in Greece in terms of students.

The Anthi Karagianni Municipal Stadium (Greek: Δημοτικό Στάδιο Ανθή Καραγιάννη), formerly the Kavala National Stadium, is a multi-purpose stadium in Kavala, Greece. It is the homebase of Kavala F.C.. The stadium was built 1970, and currently has a seating capacity of 10,500. It is named after the paralympic athlete, Anthi Karagianni, who won three silver medals in the 2004 Paralympic Games. 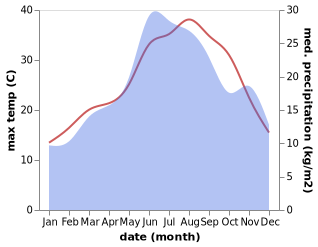