Local time in Smolyan is now 04:56 PM (Wednesday) . The local timezone is named " Europe/Sofia " with a UTC offset of 2 hours. Depending on your flexibility, these larger cities might be interesting for you: İzmir, Bucharest, Vitina, Vievo, and Stara Zagora. When in this area, you might want to check out İzmir . We found some clip posted online . Scroll down to see the most favourite one or select the video collection in the navigation. Are you looking for some initial hints on what might be interesting in Smolyan ? We have collected some references on our attractions page.

Rhodope Mountains in pictures and sound

Photos from a tour in the Rhodope mountains - one of the most beautiful places in Bulgaria. ..

Pamporovo 2008 - Around The Castle

A quick view of building progress around the Castle development in Pamporovo ..

Septemvri Stadium is a multi-use stadium in Smolyan, Bulgaria. It is currently used mostly for football matches and is the home stadium of PFC Rodopa Smolyan. The stadium holds 6,100 people.

Cathedral of Saint Vissarion of Smolyan

This article is about the TV tower. For other uses, see Snezhanka (disambiguation). Snezhanka Tower (кула „Снежанка“) is a 156-metre-high television tower built of reinforced concrete with an observation deck near Pamporovo, Bulgaria. Snezhanka Tower is situated on Snezhanka Peak, at 1928 m above sea level. The tower has a café with a panoramic view of the Rhodope, the Rila and the Pirin Mountains, even the Aegean Sea being visible on a clear day.

The village of Chokmanovo, Bulgaria is in Municipality of Smolyan, in the Arda valley of the Rhodopi Mountain range. It is 8km south of the town of Smolyan and 25km from the ski resort Pamporovo. The region is very sunny, and the village is near the top of a southern slope so it receives direct sun more than 300 days a year. It has 4 seasons, is snowy in winter and subject to spectacular thunderstorms in the late afternoons of summer.

Bostina is a village in the municipality of Smolyan, located in the Smolyan Province of southern Bulgaria. The village covers an area of 4.77 km² and is located 168.3 km from Sofia. As of 2007, the village had a population of 137 people. 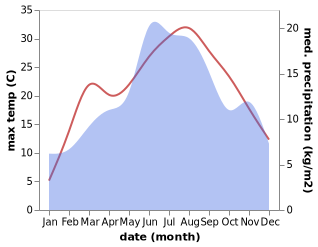