Delve into Ivanovo-Alekseyevka in Kyrgyzstan

Ivanovo-Alekseyevka in the region of Talas is located in Kyrgyzstan - some 123 mi or ( 198 km ) West of Bishkek , the country's capital .

Local time in Ivanovo-Alekseyevka is now 02:36 PM (Saturday) . The local timezone is named " Asia/Bishkek " with a UTC offset of 6 hours. Depending on your mobility, these larger destinations might be interesting for you: Tashkent, Andijan, Khujand, Taraz, and Tash-Tyube. While being here, you might want to check out Tashkent . We discovered some clip posted online . Scroll down to see the most favourite one or select the video collection in the navigation. Are you curious about the possible sightsseing spots and facts in Ivanovo-Alekseyevka ? We have collected some references on our attractions page.

The Battle of Talas (or Battle of Artlakh) (怛羅斯會戰) (معركة نهر طلاس) in 751 AD was a conflict between the Arab Abbasid Caliphate and the Chinese Tang Dynasty, then under Emperor Xuanzong (together with various other peoples and nations associated with the geographical territory involved) for control not only of the Syr Darya region, but also a strategic area of Central Asia.

Talas is a raion (district) of Talas Province in north-western Kyrgyzstan. The capital lies at Kok Oy.

Talas Airport is an airport serving Talas, a town in Talas Province of Kyrgyzstan. The Russian IATA code for Talas Airport is ТЛС. Talas Airport started its operations in 1940s as a landing strip outside the then small provincial town. The current runway and terminal were built in 1979. It is a regional class 3C airport. The runway has a weight limit of 22 tonnes, and has no instrument landing facilities and operates only during daylight hours. 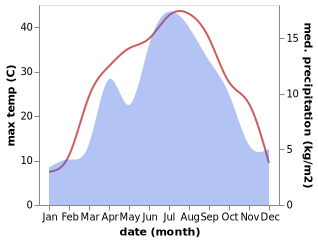