Current time in Tripoli is now 03:18 PM (Tuesday) . The local timezone is named " Asia/Beirut " with a UTC offset of 2 hours. Depending on the availability of means of transportation, these more prominent locations might be interesting for you: Nicosia, Homs, Damascus, Amman, and Zgharta. Since you are here already, make sure to check out Nicosia . We saw some video on the web . Scroll down to see the most favourite one or select the video collection in the navigation. Where to go and what to see in Tripoli ? We have collected some references on our attractions page.

Visiting the Citadelle in Tripoli Lebanon

A walk through the Citadelle in Tripoli Lebanon, Jan 2008. ..

Lebanon has seen an increase in the number of people from Syria seeking sanctuary. Al Jazeera's Rula Amin reports from Tripoli. ..

Tripoli is the largest city in northern Lebanon and the second-largest city in the country. Situated 85 km north of the capital Beirut, it is the capital of the North Governorate and the Tripoli District. Tripoli overlooks the eastern Mediterranean Sea, and it is the easternmost seaport in Lebanon. It holds offshore a string of four small islands, the only surviving islands of Lebanon.

The Citadel of Raymond de Saint-Gilles, also known as Qala'at Sanjil in Arabic, is a citadel and fort in Tripoli, Lebanon. It takes its name from Raymond de Saint-Gilles, the Count of Toulouse and Crusader commander who started its construction on a hilltop outside Tripoli in 1103 in order to lay siege to the city. Later, Raymond enlarged the fortress, which he named Mont Peregrinus (Mt Pilgrim).

Tripoli Municipal Stadium is a 22,000 capacity multi-use stadium in Tripoli, Lebanon. It is located near the city center. It was recently rehabilitated to welcome Arabic competitions as well as Asian and International ones. It is also the home ground of Tripoli SC.

American University of Technology (AUT), is a private university established in Lebanon. It was founded in 1998 by Ghada Hinain near Byblos. The university is directed by an appointed Board of Trustees. AUT's mission is to provide non-sectarian American higher education opportunities to qualified students from rural villages and towns between Beirut and Tripoli, and they have distinguished and proved themselves among other Lebanese students.

The Tripoli railway station is located near El-Mina, Tripoli, Lebanon. It began operating in 1911 and was connected to the Syrian city, Homs, with a single track. It formed the terminus of the Orient Express line in the twenties, thirties and forties of the last century. Tripoli station was connected to the central station of Beirut (Mar Mikael) in 1945. During World War I, the Ottomans, and for military reasons, damaged the Tripoli/Homs line. 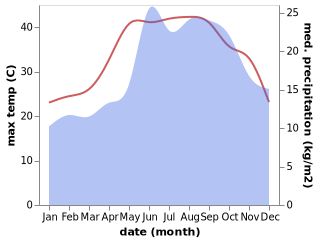