Local time in Barsuki is now 08:02 PM (Wednesday) . The local timezone is named " Europe/Moscow " with a UTC offset of 4 hours. Depending on your flexibility, these larger cities might be interesting for you: Yakovlevo, Volokolamsk, Tula, Ryazan, and Plekhanovo. When in this area, you might want to check out Yakovlevo . We found some clip posted online . Scroll down to see the most favourite one or select the video collection in the navigation. Are you looking for some initial hints on what might be interesting in Barsuki ? We have collected some references on our attractions page.

After a City Day

The photo from this video can look in an album fotki.yandex.ru ..

Klokovo is an air base in Russia located on north fringe of Tula. It has been home to 374 OVTAP (374th Independent Military Transport Aviation Regiment) flying Il-76 and An-22 large cargo planes, of 12th Mginskaya Krasnoznamennaya military-transport aircraft division. Then, a scholastic regiment of Tambov military aircraft school (L-29) was situated there. The runway was used by the military together with a civil airport which closed in 1992.

Tula Arms Plant (or Tulsky Oruzheiny Zavod) is a Russian weapons manufacturer founded by Tsar Peter I of Russia in 1712 in Tula, Russia as Tula Arsenal. Throughout its history, it has produced weapons for whomever controlled the Russian state. Its name was changed from Tula Arsenal to Tula Arms Plant during the Soviet era.

Tula Kremlin is a fortress in Tula, Russia. Monument of the 16th century. There are 2 Cathedrals inside the Kremlin: Assumption Cathedral (1762-1766) Epiphany Cathedral (1855-1863)

Arsenal Stadium is a multi-use stadium in Tula, Russia. It is used mostly for FC Arsenal Tula football matches. The stadium was constructed in 1959 and holds 20,048 people 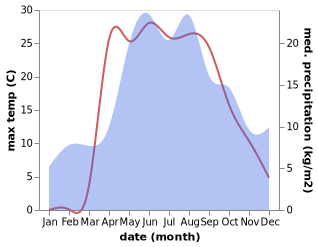