Vršac in the region of Autonomna Pokrajina Vojvodina with its 36,300 inhabitants is a town in Serbia - some 46 mi or ( 75 km ) North-East of Belgrade , the country's capital city .

Current time in Vršac is now 11:11 AM (Thursday) . The local timezone is named " Europe/Belgrade " with a UTC offset of 1 hours. Depending on the availability of means of transportation, these more prominent locations might be interesting for you: Timişoara, Moravita, Lugoj, Jamu Mare, and Cluj-Napoca. Since you are here already, make sure to check out Timişoara . We saw some video on the web . Scroll down to see the most favourite one or select the video collection in the navigation. Where to go and what to see in Vršac ? We have collected some references on our attractions page.

Spot recorded on hill near Vrsac city. Vrsac is in Serbia (Europe). ..

WE ARE FROM SERBIA!

The Millennium Center (Serbian: Центар Миленијум, Centar Milenijum) is a multi-purpose indoor arena located in the city of Vršac. It is the home ground of basketball club KK Hemofarm and has a capacity of 4,400 spectators. The arena is also used for concerts and other live entertainment.

The Vršac Castle (Serbian: Вршачки замак, Vršački zamak) formerly known as "Vršac Tower" (Serbian: Вршачка кула, Vršačka kula) is a medieval fortress near Vršac, Vojvodina, Serbia. Only Donjon tower remained from the entire complex, but in 2009 reconstruction started that will recreate entire Vršac Castle. Vršac Castle was declared Monument of Culture of Great Importance in 1991, and it is protected by Republic of Serbia.

Vršac International Airport is one of Serbia's busiest sport airports and Serbia's fourth international airport since December 28, 2006. The airport is mainly utilized for air-taxi operations, pilot training, basic aircraft maintenance, and agricultural aviation. There are five hangars built at the airport, these accommodate aircraft of the flight school and of the agricultural aviation division.

The Mesić Monastery is a Serb Orthodox monastery situated in the Banat region, in the province of Vojvodina, Serbia. The monastery is situated near the village of Mesić, in the Vršac municipality. It was founded in 1225 by Arsenije Bogdanović of the Hilandar. Mesić Monastery was declared Monument of Culture of Exceptional Importance in 1990, and it is protected by Republic of Serbia.

The Središte Monastery is a Serb Orthodox monastery located in the Banat region, in the northern Serbian province of Vojvodina. The monastery is situated near the villages of Malo Središte and Veliko Središte, in the Vršac municipality. It was built in the late 15th century by Despot Jovan Brankovic. 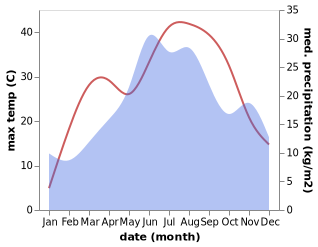