Delve into Košice in Slovakia

Local time in Košice is now 08:40 PM (Thursday) . The local timezone is named " Europe/Bratislava " with a UTC offset of 1 hours. Depending on your mobility, these larger destinations might be interesting for you: Lviv, Miskolc, Eger, Debrecen, and Zdana. While being here, you might want to check out Lviv . We discovered some clip posted online . Scroll down to see the most favourite one or select the video collection in the navigation. Are you curious about the possible sightsseing spots and facts in Košice ? We have collected some references on our attractions page.

Košice-Juh is part of the city of Košice, Slovakia. It is located in the southern area of the town. The oldest building there is the Holy Spirit Church, erected in 1733.

The East(ern) Slovak Gallery in Košice was founded in 1951 as the first regional gallery in Slovakia. The Baroque-Classical palace-type building was erected in 1779 for the needs of the Abov comitatus council. The building continued to serve as a comitatus hall until 1928. For several weeks starting in April 1945, it was used by the government of Czechoslovakia, temporarily resident in Košice at that time.

The St. Michael Chapel (Slovak: Kaplnka sv. Michala) is a Gothic Chapel in Košice, Slovakia. It was probably erected in the first half of the 14th century. It was built as a cemetery chapel inside the town walls in the place of the present-day park at Hlavná ulica. The lower part of the chapel was initially an ossarium, the upper one served for offices for the deceased. The patron of the dead, Saint Michael the Archangel, trampling the Devil, is shown on the facade. 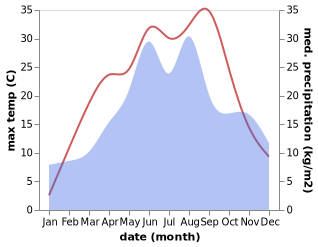