Time in Benahadux is now 09:07 PM (Friday) . The local timezone is named " Europe/Madrid " with a UTC offset of 1 hours. Depending on your budget, these more prominent locations might be interesting for you: Úbeda, Terque, Tabernas, Salobreña, and Roquetas de Mar. Since you are here already, consider visiting Úbeda . We saw some hobby film on the internet . Scroll down to see the most favourite one or select the video collection in the navigation. Where to go and what to see in Benahadux ? We have collected some references on our attractions page.

iPhone 4G 32GB HD video showing the journey from Almeria on the A92 Autovia, through the Tavernas desert (the only desert in Europe) in the direction North towards Granada. Vehicle is a 2008 Toyota La ..

The Running Commentary Run: Down the canyon -- the call of the wild ..

Los Millares is the name of a Chalcolithic occupation site 17 km north of Almería, in the municipality of Santa Fe de Mondújar, Andalusia, Spain. The complex was in use from the end of the fourth millennium to the end of the second millennium BC and probably supported somewhere around 1000 people. It was discovered in 1891 during the course of the construction of a railway and was first excavated by Luis Siret in the succeeding years. Further excavation work continues today.

The Tabernas Desert is a desert in Spain, and one of the only true deserts in Europe, the others being also located within Spain´s southeastern province of Almería, where annual rainfall is, in many parts well below 200 mm a year. It is located about 30 kilometers north of the provinical capital, Almería, in the Tabernas municipality. It is protected as a wilderness area spanning 280 square kilometres . 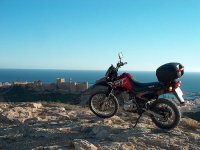 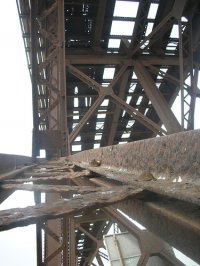