Current time in Roquetas de Mar is now 01:38 PM (Wednesday) . The local timezone is named " Europe/Madrid " with a UTC offset of 1 hours. Depending on the availability of means of transportation, these more prominent locations might be interesting for you: Úbeda, Salobreña, Nerja, Las Hortichuelas, and Las Entinas. Since you are here already, make sure to check out Úbeda . We saw some video on the web . Scroll down to see the most favourite one or select the video collection in the navigation. Where to go and what to see in Roquetas de Mar ? We have collected some references on our attractions page.

Poniente Almeriense or Campo de Dalías is a comarca in Almería, Spain. It is sometimes also known as the "sea of plastic" (Mar de plastico) due to the numerous greenhouses that cover the area. The comarca contains nine municipalities and 218,426 inhabitants in an area of 971 km². The "sea of plastic" was one of the subjects of We feed the world, a 2005 documentary.

More reading: Wikipedia Article
Located at 36.78 -2.74 (Lat./Long.); Less than 12 km away
Tags: Comarcas of Andalusia, Geography of the Province of Almería

The Estadio Municipal de Santo Domingo is a multi-use stadium in El Ejido, Spain. It is currently used mostly for football matches and was the home ground of the now defunct Polideportivo Ejido. The stadium holds 7,870 (all-seated) and was built in 2001. 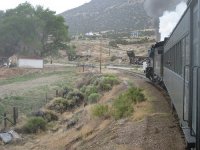