Current time in Balıkesir is now 03:26 AM (Wednesday) . The local timezone is named " Europe/Istanbul " with a UTC offset of 2 hours. Depending on the availability of means of transportation, these more prominent locations might be interesting for you: Yaylacik, Pasakoy, Pamukcu, Ovakoy, and Ortamandira. Since you are here already, make sure to check out Yaylacik . We encountered some video on the web . Scroll down to see the most favourite one or select the video collection in the navigation. Where to go and what to see in Balıkesir ? We have collected some references on our attractions page.

Balıkesir Atatürk Stadium (Turkish: Balıkesir Atatürk Stadyumu) is a multi-purpose stadium in Balıkesir, Turkey. The stadium holds 15,800 all-seater and was built in 1973 and re-built in 2010. It abides UEFA standards for TFF standards for hosting TFF Second League, TFF First League and also Super Lig games. The stadium is currently used mostly for football matches, and is the home ground of Balıkesirspor. Turkey national under-21 football team also played games at this stadium.

Balıkesir Airport is a military airport in the city of Balıkesir, Turkey. It also serves the public with scheduled domestic flights on one commercial airline. Balıkesir is home to the 9th Air Wing (Ana Jet Üs or AJÜ) of the 1st Air Force Command (Hava Kuvvet Komutanligi) of the Turkish Air Force (Türk Hava Kuvvetleri). Other wings of this command are located in Eskişehir (LTBI), Konya (LTAN), Ankara Akıncı (LTAE) and Bandırma (LTBG).

Balıkesir Province is a province in midwestern Turkey, having coastlines on both the Sea of Marmara and the Aegean. Its adjacent provinces are Çanakkale to the west, İzmir to the southwest, Manisa to the south, Kütahya to the southeast, and Bursa to the east. The provincial capital is Balıkesir City.

İkizcetepeler Dam is a dam in Turkey. The development was backed by the Turkish State Hydraulic Works. 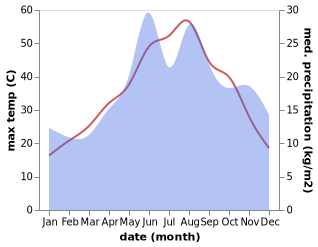