Time in Bursa is now 07:46 AM (Friday) . The local timezone is named " Europe/Istanbul " with a UTC offset of 2 hours. Depending on your travel resources, these more prominent places might be interesting for you: Kütahya, İzmir, Balıkesir, Ankara, and Afyonkarahisar. Being here already, consider visiting Kütahya . We collected some hobby film on the internet . Scroll down to see the most favourite one or select the video collection in the navigation. Check out our recomendations for Bursa ? We have collected some references on our attractions page.

Sufism or taṣawwuf (Arabic: تصوّف‎) is defined by its adherents as the inner, mystical dimension of Islam. A practitioner of this tradition is generally known as a ṣūfī (صُوفِيّ). Another name for a S ..

Panorama of Bursa city on a cold a foggy morning ..

Bursa Grand Mosque or Ulu Cami is a mosque in Bursa, Turkey. Built in the Seljuk style, it was ordered by the Ottoman Sultan Bayezid I and built between 1396 and 1399. The mosque has 20 domes and 2 minarets.

Bayzid I Mosque (Turkish; Yıldırım Camii or Yıldırım Bayezid Camii) is a historic mosque in Bursa, Turkey, that is part of the large complex built by the Ottoman Sultan Bayezid I (Yıldırım Bayezid - Bayezid the Thunderbolt) between 1391-1395. It is situated in Bursa metropolitan district of Yıldırım, also named after the same sultan. It went under extensive renovation following the 1855 Bursa earthquake.

The Muradiye Complex or the Complex of Sultan Murad II, the Ottoman sultan who ruled 1421-1451, is located in the city of Bursa in Turkey. Sultan Murat II was the last of the Ottoman sultans to reign in the original Ottoman capitol of Bursa, previous to the conquest of Constantinople in 1453. There are twelve tombs in the complex, all belonging to relatives of this sultan. Construction of the complex began after the completion of the Yeşil Mosque, which is in the eastern area of Bursa.

Yeşil Mosque (Turkish: Yeşil Cami, "Green Mosque"), also known as Mosque of Mehmed I, is a part of the larger complex located on the east side of Bursa, Turkey, the former capital of the Ottoman Turks before they captured Constantinople in 1453. The complex consists of a mosque, türbe, madrasah, kitchen and bath.

Complex of Mehmed I

The Complex of Mehmed I, aka Yeşil Complex, is a large Ottoman complex of religious buildings in Bursa, Turkey built by Sultan Mehmed I Çelebi and completed in 1420. The complex is one of the last in a series of royal mosque complexes in Bursa starting with the Orhaniye Complex in the 14th century and ending with the Muradiye Complex completed in 1447. The complex includes the Yeşil Mosque, a madrasah, bath house, soup kitchen, and Yeşil Türbe (the tomb of Mehmed I Çelebi). 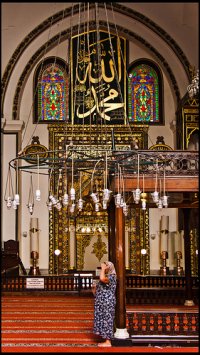 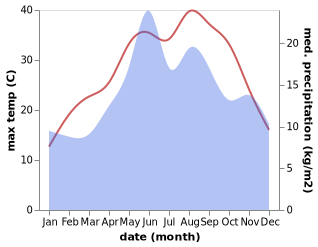