Local time in Karabük Province is now 01:03 PM (Saturday) . The local timezone is named " Europe/Istanbul " with a UTC offset of 2 hours. Depending on your mobility, these larger cities might be interesting for you: Ankara, Simferopol, Sevastopol, Zonguldak, and Yazikoy. When in this area, you might want to check out Ankara . We discovered some clip posted online . Scroll down to see the most favourite one or select the video collection in the navigation. Are you looking for some initial hints on what might be interesting in Karabük Province ? We have collected some references on our attractions page.

Preview of Frankgo's blog at TravelPod. Read the full blog here: www.travelpod.com This blog preview was made by TravelPod using the TripAdvisor™ TripWow slideshow creator. Learn more about these vide ..

Dr. Necmettin Şeyhoğlu Stadium, is a football stadium in Karabük, Turkey. It is mainly used for football matches and hosts the home matches of Karabükspor of the Süper Lig. The stadium has a capacity of 8,000 spectators.

Karabük Province (Turkish: Karabük ili) is a landlocked province in the northern part of Anatolia, located about 200 km north of Ankara, 115 km away from Zonguldak and 113 km away from Kastamonu, with a total population of 227,610 (as of 2010). The main city is Karabük which is located about 100 km south of the Black Sea coast. Karabük Province is one of the newest provinces of Turkey. Until 1995 it was a district of Zonguldak, when it became an il (provincial center) in its own right.

Kılavuzlar is a village in the central district of Karabük Province, Turkey. The village is situated between Karabük and Safranbolu at {{#invoke:Coordinates|coord}}{{#coordinates:41|13|N|32|40|E||| | |name= }}. The Araç creek is to the south of the village. The distance to Karabük is 6 kilometres . The population of Cumayanı is 1682 as of 2011. The village economy depends on vegetable and fruit gardening.

Safranbolu is a town and district of Karabük Province in the Black Sea region of Turkey. It is about 200 kilometres north of Ankara and about a 100 km south of the Black Sea coast, or more precisely about 9 km north of the city of Karabük. Former Turkish names of the town were Zalifre and Taraklıborlu and in Greek Saframpolis, Σαφραμπολις. It was part of Kastamonu Province until 1923 and Zonguldak Province between 1923 and 1995. 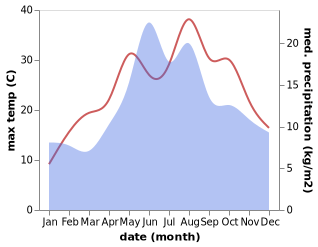