Time in Chernivtsi is now 02:07 PM (Thursday) . The local timezone is named " Europe/Kiev " with a UTC offset of 2 hours. Depending on your travel resources, these more prominent places might be interesting for you: Chişinău, Suceava, Iaşi, Cluj-Napoca, and Bucharest. Being here already, consider visiting Chişinău . We collected some hobby film on the internet . Scroll down to see the most favourite one or select the video collection in the navigation. Check out our recomendations for Chernivtsi ? We have collected some references on our attractions page.

Chernivtsi Philharmonic Hall is part of the network of state philharmonic halls in Ukraine located in the central part of Chernivtsi, Ukraine.

The Czernowitz Synagogue was a domed, Moorish Revival synagogue built in 1873 in what is now Chernivtsi, Ukraine. At the time it was built, the city was known as Czernowitz and was part of Austria-Hungary. The architect was Julian Zachariewicz (1873–78). The synagogue was confiscated and closed by the Soviet government after it gained Northern Bukovina (of which Czernowitz is the largest city) from Romania in 1940.

(BSMU) is one of the largest higher educational establishment in Chernivtsi. It has recently celebrated the 65th anniversary of its foundation. It is a modern multiprofile educational institution of the IV accreditation level, included into the general register of the WHO, Magna Charta Universitatum (Bologna, Italy), the Association of the Carpathian Region Universities that provides qualified training according to the grade system of education.

Bukovyna Stadium is a multi-use stadium in Chernivtsi, Ukraine. It is currently used mostly for football matches, and is the home of FC Bukovyna Chernivtsi. The stadium holds 12,000 spectators. 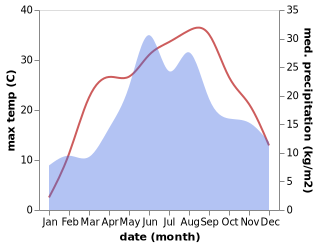