Time in Krasnyy Kut is now 12:43 AM (Sunday) . The local timezone is named " Europe/Zaporozhye " with a UTC offset of 2 hours. Depending on your budget, these more prominent locations might be interesting for you: Severnyy, Rostov-on-Don, Krasnodar, Cherkessk, and Belgorod. Since you are here already, consider visiting Severnyy . Where to go and what to see in Krasnyy Kut ? We have collected some references on our attractions page.

Merheleva Ridge (Ukrainian: Мергелева гряда, also transliterated Mergeleva) is the site of an Eneolithic temple and burial complex consisting primarily of four large stone mounds or kurgans situated near Perevalsk, Luhansk oblast, Ukraine, about 30 km to the west-to-southwest of the city of Luhansk. It was built in about 4000 BC, corresponding to the Dnieper-Donets or early Yamna culture, and remained in use throughout the Bronze Age and well into the Iron Age, until 5th century BC Sarmatia. 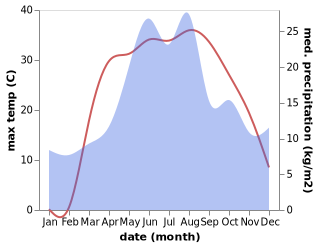