Delve into Pupukea in United States

Current time in Pupukea is now 04:56 AM (Saturday) . The local timezone is named " Pacific/Honolulu " with a UTC offset of -10 hours. Depending on your travel modalities, these larger destinations might be interesting for you: Kahuku, Kamo'oloa, La'ie, Lihue, and Mokuleia. While being here, make sure to check out Kahuku . We encountered some video on the web . Scroll down to see the most favourite one or select the video collection in the navigation. Are you curious about the possible sightsseing spots and facts in Pupukea ? We have collected some references on our attractions page.

This beach is south of Shark's Cove and north of Waimea Bay Beach Park. It is right across from Foodland Supermarket. You can get snorkeling gear and water shoes at relatively low price from the super ..

www.homeaway.com A Video Tour Of The Sunset Beach House, Oahu's Favorite Vacation Rental Home. Located directly on the sand at exotic Sunset Beach, on the world famous North Shore of Oahu, Hawaii. My ..

www.homeaway.com A Video Tour Of The Sunset Beach House, Oahu's Favorite Vacation Rental Home. Located directly on the sand at exotic Sunset Beach, on the world famous North Shore of Oahu, Hawaii. My ..

The Banzai Pipeline, or simply "Pipeline" or "Pipe," is a surf reef break located in Hawaii, off Ehukai Beach Park in Pupukea on O'ahu's North Shore. A reef break is an area in the ocean where waves start to break once they reach the shallows of a reef. Pipeline is notorious for huge waves which break in shallow water just above a sharp and cavernous reef, forming large, hollow, thick curls of water that surfers can tube ride.

Sunset Beach is on the North Shore of Oahu in Hawai'i and known for big wave surfing during the winter season. The original Hawaiian name for this place is Paumalū. It is home to the Duke Kahanamoku Classic surfing competition, the O'Neill World Cup of Surfing competition, and is occasionally the site of the Quiksilver Big Wave Invitational.

Puʻu o Mahuka Heiau State Historic Site on the North Shore of Oʻahu is the largest heiau on the island, covering 2 acres on a hilltop overlooking Waimea Bay and Waimea Valley. Puʻu o Mahuka means 'Hill of Escape'. Hawaiian legends have it that from this point, Pele (Volcano Goddess) leaped from Oahu to the next island, Molokai.

Waimea Bay is located in Haleiwa on the North Shore of O‘ahu in the Hawaiian Islands at the mouth of the Waimea River. Waimea Valley extends behind Waimea Bay. Waimea means "Red Water" in Hawaiian.

Waimea Valley is an area of historic cultural significance on the North Shore of Oahu, Hawaii. The valley, being an important place in Hawaiian religion, includes several historical structures including stone terraces and walls constructed during the time of the Hawaiian monarchy. Much of the garden floor was once cultivated for taro, sweet potato, and bananas, with new crops and orchards introduced by Europeans after their arrival. 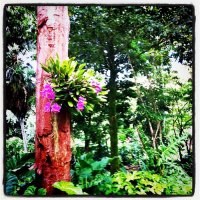 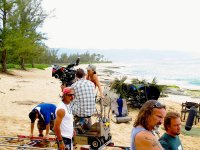