Kitob Shahri in the region of Kashkadarya Province is a town in Uzbekistan - some 193 mi or ( 310 km ) South-West of Tashkent , the country's capital city .

Current time in Kitob Shahri is now 02:28 PM (Wednesday) . The local timezone is named " Asia/Samarkand " with a UTC offset of 5 hours. Depending on the availability of means of transportation, these more prominent locations might be interesting for you: Yukary-Chil'dzhigut, Yangiqishloq, Varganza, Urta-Chil'dzhigut, and Susultan. Since you are here already, make sure to check out Yukary-Chil'dzhigut . Where to go and what to see in Kitob Shahri ? We have collected some references on our attractions page.

Shakhrisabz, is a city in Qashqadaryo Province in southern Uzbekistan located approximately 80 km south of Samarkand with the population of 53,000 (1991). It is located at the altitude of 622 m. Once a major city of Central Asia, it is primarily known today as the birthplace of 14th century Turco-Mongol conqueror Timur.

Yakkabog District is a district of Qashqadaryo Province in Uzbekistan. The capital lies at Yakkabog. 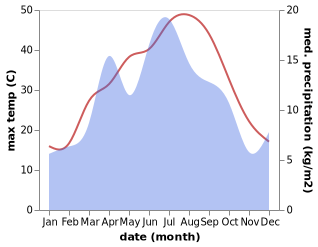