Current time in Nahrin is now 10:42 PM (Sunday) . The local timezone is named " Asia/Kabul " with a UTC offset of 4.5 hours. Depending on the availability of means of transportation, these more prominent locations might be interesting for you: Taloqan, Aibak, Pul-e Khumri, Kunduz, and Kabul. Since you are here already, make sure to check out Taloqan . Where to go and what to see in Nahrin ? We have collected some references on our attractions page.

On 11 June 2012, two earthquakes struck northern Afghanistan, causing a large landslide. The landslide buried the town of Sayi Hazara, trapping 71 people. After four days of digging, only five bodies were recovered and the search was called off. Overall, 75 people were killed and 13 others were injured.

Tepe Fullol (also known as Khush Tepe) is the site of an abandoned Bronze Age settlement in northern Afghanistan. It was discovered in 1965 by farmers who discovered gold and silver objects in a grave cache and thereby provided the first evidence of this civilisation in Afghanistan. Tepe Fullol is situated in Baghlan Province at the junction of the Khost and Sai valleys. Based upon excavated materials, it has been dated to between 2600 and 1700 BC. 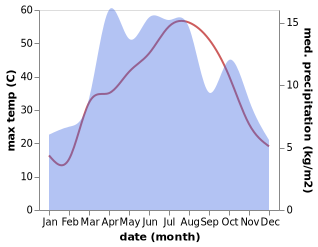