Time in Aibak is now 09:58 AM (Sunday) . The local timezone is named " Asia/Kabul " with a UTC offset of 4.5 hours. Depending on your budget, these more prominent places might be interesting for you: Tola Gachi 2, Shuluklu, Sarqiyeh-ye Afghaniyeh, Sar-e Kundah-ye Bala, and Mazari Sharif. Being here already, consider visiting Tola Gachi 2 . Check out our recomendations for Aibak ? We have collected some references on our attractions page.

Haibak is a town of Afghanistan in the Samangan Province and is a former khanate of Afghan Turkestan. The valley of Haibak, which is 3,100 feet above sea level, is fertile and richly cultivated. The town, which is famed in Persian legend, is now very small and does not appear on most maps. Due to its location, Haibak has been influenced by Buddhist, Islamic and Turkic and Persian peoples. 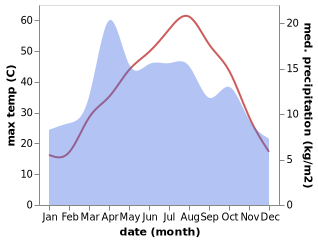