Local time in Aabenraa is now 01:48 AM (Wednesday) . The local timezone is named " Europe/Copenhagen " with a UTC offset of 1 hours. Depending on your flexibility, these larger cities might be interesting for you: Varnaes, Styrtom, Stollig, Knappen, and Rødekro. When in this area, you might want to check out Varnaes . We found some clip posted online . Scroll down to see the most favourite one or select the video collection in the navigation. Are you looking for some initial hints on what might be interesting in Aabenraa ? We have collected some references on our attractions page.

Paul's performance of the brilliant Foo Fighters song, Home in the Southern Danish town of Aaberaa on his Christmas Tour 2012. For more news on Paul please follow his continued journey on www.twitter. ..

South Jutland County is a former county on the south-central portion of the Jutland Peninsula in southern Denmark. The county was formed on April 1, 1970, comprising the former counties of Aabenraa (E), Haderslev (N), Sønderborg (SE), and Tønder (SW). The county was abolished effective January 1, 2007, when the Region of Southern Denmark was formed.

Aabenraa Municipality or Åbenrå Municipality is a municipality in Region of Southern Denmark in south-western Denmark. It has existed in its current form since 1 January 2007 following a merger of several smaller municipalities. The municipality has an area of 951 km² and a total population of 60,189 (2008). The main town and the site of its municipal council is the city of Aabenraa. The mayor is Tove Larsen representing the Social Democrats.

Rødekro is a town with a population of 6,122 (1 January 2012) and a former municipality in Aabenraa municipality in Region of Southern Denmark on the Jutland peninsula in south Denmark. The former Rødekro municipality covered an area of 202 km², and had a total population of 11,695 (2005). Its last mayor was Tove Larsen, a member of the Social Democrats (Socialdemokraterne) political party.

Hjordkær is a village in Hjordkær parish, Aabenraa Municipality, Region of Southern Denmark in Denmark with a population of 1,695 (1 January 2011).

More reading: Wikipedia Article
Located at 55.03 9.31 (Lat./Long.); Less than 7 km away
Tags: Cities and towns in Region of Southern Denmark 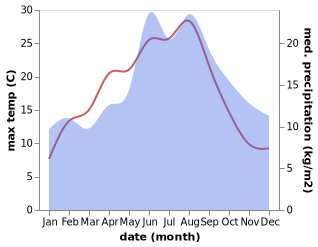