Delve into Lavia in Finland

Lavia in the region of Province of Western Finland with its 2,109 residents is located in Finland - some 126 mi or ( 203 km ) North-West of Helsinki , the country's capital .

Local time in Lavia is now 01:57 AM (Thursday) . The local timezone is named " Europe/Helsinki " with a UTC offset of 2 hours. Depending on your mobility, these larger destinations might be interesting for you: Tallinn, Ylöjärvi, Vihteljarvi, Turku, and Tervahauta. While being here, you might want to check out Tallinn . Are you curious about the possible sightsseing spots and facts in Lavia ? We have collected some references on our attractions page.

Karhijärvi is a lake in Finland. It is situated in the region of Satakunta in western Finland and there in the municipality of Lavia. It is part of the Karvianjoki basin.

Suodenniemi is a former municipality of southwestern Finland. Suodenniemi was first consolidated into Vammala in 2007. On 1 January 2009, Vammala itself was consolidated with Äetsä and Mouhijärvi to form the new named town of Sastamala.

Sääksjärvi is a lake in Kokemäki, Satakunta, western Finland, east from the town of Pori. The lake is notable because it overlies an impact crater. The crater is 5 kilometres in diameter and is completely buried under the lake and is not visible at the surface. The age of the impact structure is estimated to be about 543 ± 12 Ma (million years ago), at the boundary between the Ediacaran and Cambrian periods. 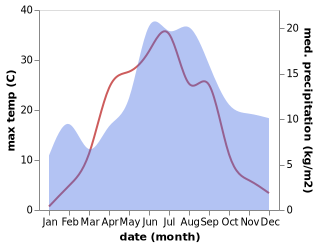