Delve into Zrenjanin in Serbia

Zrenjanin in the region of Autonomna Pokrajina Vojvodina with its 79,773 residents is a city in Serbia - some 40 mi or ( 65 km ) North of Belgrade , the country's capital .

Current time in Zrenjanin is now 11:58 PM (Sunday) . The local timezone is named " Europe/Belgrade " with a UTC offset of 1 hours. Depending on your travel modalities, these larger destinations might be interesting for you: Timişoara, Cluj-Napoca, Arad, Sofia, and Vršac. While being here, make sure to check out Timişoara . We encountered some video on the web . Scroll down to see the most favourite one or select the video collection in the navigation. Are you curious about the possible sightsseing spots and facts in Zrenjanin ? We have collected some references on our attractions page.

Dry Bridge (Serbian: Мост на сувом, Суви мост) is a bridge in Zrenjanin, Serbia. It currently does not span any physical obstacle, since the flow of the river under it was diverted.

Uspenska church was built in 1746, in Bečkerek, today Zrenjanin. It is located in Svetosavska street.

Karađorđev Park Stadium (Serbian: Стадион Карађорђев парк) is a multi-purpose stadium in Zrenjanin, Serbia. It is currently used mostly for football matches and is the home ground of FK Banat Zrenjanin. The stadium is capable of seating 13,500 people.

Central Banat District (Serbian: Средњебанатски округ, Srednjebanatski okrug) is a northeastern district of Serbia. It lies in the region of Banat, in the autonomous province of Vojvodina. It has a population of 186,851. Seat of the District is in the city of Zrenjanin. 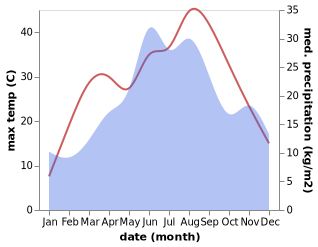