Ghafurov in the region of Sughd is a town located in Tajikistan - some 127 mi or ( 204 km ) North-East of Dushanbe , the country's capital .

Local time in Ghafurov is now 12:58 PM (Monday) . The local timezone is named " Asia/Dushanbe " with a UTC offset of 5 hours. Depending on your flexibility, these larger cities might be interesting for you: Balkh, Samarkand, Istaravshan, Dushanbe, and Tashkent. When in this area, you might want to check out Balkh . We found some clip posted online . Scroll down to see the most favourite one or select the video collection in the navigation. Are you looking for some initial hints on what might be interesting in Ghafurov ? We have collected some references on our attractions page.

Ghafurov is a town in Ghafurov district, Sughd Province, Tajikistan. It has a population of 15,700 (2008 estimate), down from 18,900 in the 1989 census. The town was created in 1965, and until 1978 had the name Sovetabad. In that year it was renamed in honor of Bobojon Ghafurovich Ghafurov, commemorating his term of office as the First Secretary of the Central Committee of the Communist Party of Tajikistan from 1946 to 1956. Ghafurov is the administrative center of Ghafurov district.

Khudjand International Airport is an airport serving Khujand, the second-largest city in Tajikistan. It is located out of the city, in the nearby town of Chkalovsk.

Kistakuz is a town and jamoat in north-west Tajikistan. It is located in Ghafurov District in Sughd province. The jamoat has a total population of 43,346. 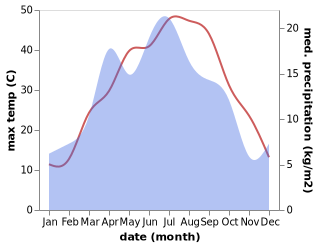