Time in Konsoy is now 02:06 AM (Monday) . The local timezone is named " Asia/Dushanbe " with a UTC offset of 5 hours. Depending on your travel resources, these more prominent places might be interesting for you: Balkh, Samarkand, Istaravshan, Dushanbe, and Tashkent. Being here already, consider visiting Balkh . Check out our recomendations for Konsoy ? We have collected some references on our attractions page.

Taboshar or Taboshary is a city in Tajikistan, located in the northern part of Ghafurov district in Sughd Province. Taboshar is a city of provincial subordination, administratively subordinated to the provincial capital of Khujand, not to the district capital of Ghafurov. The population of Taboshar in 2007 is estimated at 12,700. 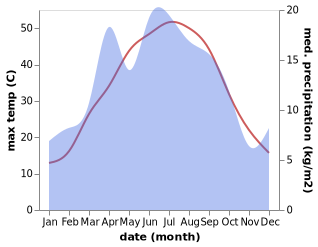