Local time in Adapazarı is now 03:06 PM (Monday) . The local timezone is named " Europe/Istanbul " with a UTC offset of 2 hours. Depending on your flexibility, these larger cities might be interesting for you: İzmir, Dorylaeum, Ankara, Varna, and Yukari Sogutlu. When in this area, you might want to check out İzmir . We found some clip posted online . Scroll down to see the most favourite one or select the video collection in the navigation. Are you looking for some initial hints on what might be interesting in Adapazarı ? We have collected some references on our attractions page.

Adapazarı is a city in northwestern Turkey and the capital of Sakarya Province. The province itself was originally named Adapazarı as well. Adapazarı is a part of the densely populated region of the country, known as the Marmara Region. As of 2011, the city has a population of 239.284

Sakarya Atatürk Stadium (Turkish: Sakarya Atatürk Stadı) is a multi-purpose stadium in Adapazarı, Turkey. It is currently used mostly for football matches and is the home stadium of Sakaryaspor. The stadium holds 13,216 spectators. It was named after the Turkish statesman Mustafa Kemal Atatürk.

The Sangarius Bridge or Bridge of Justinian is a late Roman bridge over the river Sakarya in Anatolia, in modern-day Turkey. It was built by the East Roman Emperor Justinian I (527-565 AD) to improve communications between the capital Constantinople and the eastern provinces of his empire.

Arifiye is a district center of Sakarya Province, Turkey. It is also included in Greater Sakarya Proper. 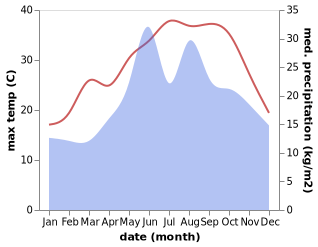