Maenttae in the region of Province of Western Finland with its 6,459 inhabitants is a town in Finland - some 129 mi or ( 208 km ) North of Helsinki , the country's capital city .

Current time in Maenttae is now 07:42 AM (Thursday) . The local timezone is named " Europe/Helsinki " with a UTC offset of 2 hours. Depending on the availability of means of transportation, these more prominent locations might be interesting for you: Tallinn, Vilppula, Turku, Tampere, and Suinula. Since you are here already, make sure to check out Tallinn . We encountered some video on the web . Scroll down to see the most favourite one or select the video collection in the navigation. Where to go and what to see in Maenttae ? We have collected some references on our attractions page.

Mänttä is a former town and municipality of Finland. It was merged with the municipality of Vilppula to form Mänttä-Vilppula on 1 January 2009. The place name Mänttä comes from an old house which Tuomas Niilonpoika Mäntsä (1570–1618) founded in Keuruskoski in the wilderness of Sääksmäki. It was located in the province of Western Finland and was part of the Pirkanmaa region. The municipality had a population of 6,407 in 2008 and covered an area of 85.84 km² of which 21.61 km² was water.

Vilppula is a former municipality of Finland. Neighbouring Mänttä was merged into it on 1 January 2009 to form the municipality of Mänttä-Vilppula. It was located in the province of Western Finland and was part of the Pirkanmaa region. The municipality had a population of 5,457 in 2005 and covered an area of 571.26 km² of which 99.90 km² was water. The population density was 10.5 inhabitants per km².

Lake Kuorevesi is a lake in Finland. It is situated in the municipalities of Mänttä-Vilppula and Jämsä in the Central Finland region. The lake is part of the Kokemäenjoki basin. The lake drains into the Lake Ruovesi in the west and the lake Keurusselkä drains into it from the north.

Keurusselkä is a lake in Central Finland between the towns of Keuruu to the north and Mänttä to the south. It covers an area of 117.3 km . Its average depth is 6.4 m with a maximum depth of 40 m . The surface lies at 105.4 m above sea level. The lake is 27 km long and is a part of the Kokemäenjoki water system. Keurusselkä gained international publicity in 2004 when a pair of amateur geologists uncovered an ancient impact crater on the western shore of the lake.

Kolho is a village in the city-municipality of Mänttä-Vilppula in Finland. During the Finnish Civil War, in winter 1918, the Finnish air force used Kolho as a base. Kolho has influenced some of the most famous Finnish artists ranging from Eero Järnefelt, Akseli Gallen-Kallela to Pentti Saarikoski and also was the site of the worst church boat accident in Finnish history. Kolho played a big role in the rise of the Finnish paper industry together with the neighbouring Mänttä community. 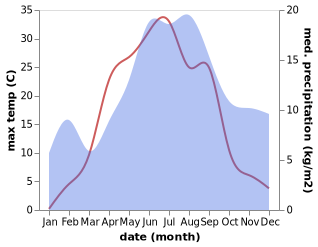