Current time in Saint Vlas is now 04:24 PM (Friday) . The local timezone is named " Europe/Sofia " with a UTC offset of 2 hours. Depending on the availability of means of transportation, these more prominent locations might be interesting for you: Bucharest, Odessa, Yambol, Veliko, and Varna. Since you are here already, make sure to check out Bucharest . We saw some video on the web . Scroll down to see the most favourite one or select the video collection in the navigation. Where to go and what to see in Saint Vlas ? We have collected some references on our attractions page.

Sveti Vlas (known as St Vlas) is a town and seaside resort on the Black Sea coast of Bulgaria, located in Nesebar municipality, Burgas Province. As of July 2007, it has a population of 3,869. The town is located at the foot of the southern slopes of the Balkan Mountains, in the northern part of Burgas Bay. A settlement was founded at the present place of Sveti Vlas in the 2nd century AD by Thracians and Greeks, then called Larissa.

Sunny Beach (Bulgarian: Слънчев бряг, Slanchev Bryag) is a major seaside resort on the Black Sea coast of Bulgaria, located approximately 35 km north of Burgas in Nessebar municipality, Burgas Province. It is the largest and most popular holiday resort in Bulgaria, and is home to over 200 hotels with more than 300,000 beds.

Obzor Pass is a mountain pass in the Balkan Mountains (Stara Planina) in Bulgaria. It connects Varna and Burgas.

Kosharitsa is a village and seaside resort in South-East Bulgaria, situated in Obshtina Nessebar, in the Burgas region.

The Church of Saint Paraskevi is a partially preserved medieval Eastern Orthodox church in Nesebar (medieval Mesembria), a town on the Black Sea coast of Burgas Province in eastern Bulgaria. It was most likely built in the 13th or 14th century and forms part of the Ancient Nesebar UNESCO World Heritage Site. The Church of Saint Paraskevi features a single nave and a pentagonal apse as well as rich exterior decoration. 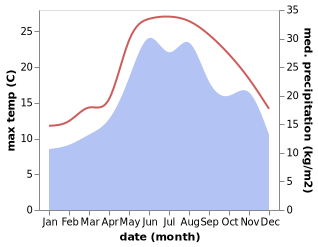