Time in Ravda is now 04:58 PM (Friday) . The local timezone is named " Europe/Sofia " with a UTC offset of 2 hours. Depending on your travel resources, these more prominent places might be interesting for you: Bucharest, Odessa, Yambol, Saint Vlas, and Varna. Being here already, consider visiting Bucharest . We collected some hobby film on the internet . Scroll down to see the most favourite one or select the video collection in the navigation. Check out our recomendations for Ravda ? We have collected some references on our attractions page.

We went to Bulgaria for two weeks in August 2006 and Ben went on the water slide at the AquaParadise in Nessebur, you will see him on the yellow one. ..

Ravda is a coastal village and seaside resort in southeastern Bulgaria, situated in Nesebar municipality, Burgas Province. Ravda is a small seaside resort on the Black Sea, located 3 km from Nesebar and 5 km from Sunny Beach. 30 km from Bourgas airport.

Aheloy is a town and seaside resort in Burgas Province, eastern Bulgaria. As of 2006 it has 2,175 inhabitants. It is situated on the Bulgarian Black Sea Coast between the major port of Burgas to the north and the bustling tourist centres Nessebur, Slunchev Bryag and Sveti Vlas to the south. One of the bloodiest battles in the Middle Ages took place near the town in 917 when the Bulgarian Emperor Simeon I delivered a devastating blow to the Byzantine army.

The Battle of Achelous or Acheloos (Bulgarian: Битката при Ахелой, Greek: Μάχη του Αχελώου), also known as the Battle of Anchialus, took place on 20 August 917, on the Achelous river near the Bulgarian Black Sea coast, close to the fortress Tuthom between Bulgarian and Byzantine forces.

Nesebar is an ancient town and one of the major seaside resorts on the Bulgarian Black Sea Coast, located in Burgas Province. It is the administrative centre of the homonymous Nesebar Municipality. Often referred to as the "Pearl of the Black Sea" and "Bulgaria's Dubrovnik", Nesebar is a rich city-museum defined by more than three millennia of ever-changing history. 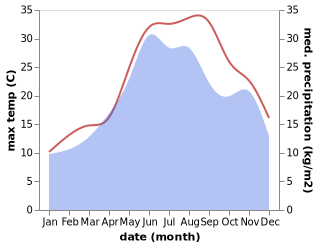